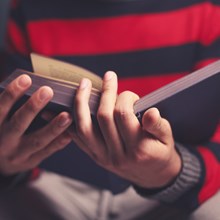 New research in cognitive psychology shows us how to help people remember what they read.
Aimee Callender
expand

Smart phones may be smart, but they seem to be making us all dumb—distracted and forgetful. Dr. Aimee Callender, assistant professor of psychology at Auburn University, explains how small-group leaders today can help people understand the Bible better and remember what they read.

SmallGroups.com: It’s common in worship services for pastors to say, “Let’s open our Bibles, so pull out your phones.” What happens when people read the Bible on a phone compared to on paper?

Aimee Callender: If the text is relatively short—a few verses, or at most a chapter—there probably won’t be large differences in someone’s abilities to read the verse. But there are several disadvantages to reading a passage on a phone or tablet as opposed to in the physical Bible. To name a few, first you lose context. When you read a physical Bible you can immediately answer: Is it in the New Testament or Old Testament? What are the surrounding books? What are the surrounding chapters? When Scripture is presented on a phone, it can lose that context.

Second, you increase opportunities for distraction. Phones provide texts, e-mails, and alerts from games. Using phones, we open ourselves to distractions. As a professor, I ask my students to put their phones away. Many students view this as a punishment, but my intent is to help them focus on one thing at a time—the lecture.

We know from 50 years of research in cognitive psychology that humans are terrible at multi-tasking. The original research on “dichotic listening”—listening to two messages at once—conducted by Cherry in 1953 showed that people cannot repeat two different messages that are heard at one time. More recently, Carrier, et al. (2015) reviewed the effects of multitasking on everyday activities like learning in the classroom. Although studies differ in the effects of multitasking on memory, the consensus is that we cannot do two things at once and do either as well as if we did one thing at a time.

What goes on inside the head of someone reading the Bible?

We psychologists say that as someone reads, he or she builds “a mental representation” of what’s being read.

Let’s say we’re reading a novel about a person visiting Paris. We create in our mind a mental representation: what Paris looks like, where the person went, how long it took them to travel to different places, and a timeline of what happened. According to researchers like Walter Kintsch (1998), this initial representation can be made based solely on what is written in the text.

Consider, though, a reader who spent a lot of time in Paris—her mental representation will be richer. She may know all of the locations and their sights, sounds, and smells.

We have the same issue when reading the Bible. There is a lot of information written in the text, but there is also a lot of information that is assumed and not explicitly stated. Because many people lack the knowledge about the physical and historical context, it is often difficult for them to understand the passage.

Can you give an example of how someone’s lack of prior knowledge can lead to misunderstanding?

Take Philippians 4:13, for example. In some translations (e.g., NIV), the verse states, “I can do all this through him who gives me strength.” What does “this” refer to? Who does the word “him” refer to? Some people might think, Of course the “him” in this verse refers to Christ. But for someone who may have less knowledge about the Bible, this may need to be explicitly stated.

If Bible study depends so much on prior knowledge about context, we’re in trouble. These days, even in the Bible Belt, people are often biblically illiterate. What can small-group leaders do?

Part of biblical illiteracy is a lack of exposure to the Bible. Encouraging people (not condemning them) to read it can help. Giving people a guidebook to the Bible can help as well. I think a lot of people are intimidated and unsure where to start with the Bible.

Leaders should also provide context. People have read or heard isolated passages but don’t understand what they have to do with each other. For example, I’ve seen daily Bible reading schedules that give an Old Testament verse, a Psalm, and a New Testament verse, but the connection between them is not obvious or even there. It’s best to show the narrative of the Bible and how the isolated passage fits within the larger narrative. We intuitively understand narratives—we know how stories unfold—so if a small-group leader can put the Scripture within the larger narrative, that helps.

When we read narratives, we naturally extract the relational aspects of the text—we are able to understand how it all fits together (McDaniel, Hines & Guynn, 2002). Think about the last novel you read: you probably didn’t have to exert much effort to follow the story line. If you were to read that same novel by reading one paragraph at a time from different chapters, however, it would be difficult to understand the narrative.

So how can small-group leaders find out what mental representation is in the mind of a group member?

The only way is to ask the person. You might say, “Describe your understanding of the passage.”

One problem I’ve seen in Bible studies is no one says anything when the leader asks a question. This could be due to a number of reasons, but, most likely, people are worrying more about what others think about them than about the question.

How do we overcome that reluctance to speak?

One simple technique I use with students is think-pair-share. First, I ask them to write something down (think), discuss it with the person next to them (pair), and then share it with the group or class. The technique works because writing allows someone to think through the question without the fear of venturing an answer in front of other people. Also, sharing the answer with one person is a lot less intimidating than sharing it with the group, even if the group is only six or eight people.

Will adults in Bible studies remember the content more if they take notes?

Anything that forces people to articulate their thoughts is going to be better than just thinking about it. For example, recent research by Mueller and Oppenhiemer (2014) showed that writing notes by hand (as opposed to typing) improved performance on conceptual questions. Why? Typing is automatic; we can do it more quickly than writing by hand, and almost without thinking. Forcing a person to slow down and write can help him or her process more of what he or she is thinking.

—Dr. Aimee Callender an Assistant Professor of Psychology at Auburn University. She received her Ph.D. in Psychology from Washington University in St. Louis. Her research interests are centered on using what cognitive psychologists have learned in the laboratory and applying those principles to improve educational practice.

For more on this topic, be sure to read Bible Study Methods for Groups.

Also, read our coverage of Bible illiteracy in America and what small groups can do about it.

God, the One and Only

Depend on our solid-rock and safe-harbor.
Keri Wyatt Kent
Worship Ideas

Falling in Love with God

Community Through the Word

It's important to read the Bible together.
Lindsay Olesberg
Icebreakers