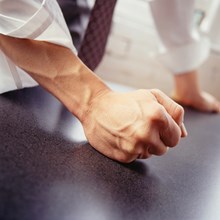 What I've learned from my mistakes
Allen White
expand

Note: This article has been excerpted from our Training Tool Effectively Confront Leaders.

The staff of my church used to call me the Pastor of Confrontation. Both my senior pastor and our student pastor were laid back Type B guys. Being the lone Type A on the team, I typically reached my breaking point about a decade before the other guys would get there.

While I was never shy about intervening, sometimes I rushed in unwisely. One situation with a small-group leader definitely got out of hand. The leader came to me complaining of a group member who was undermining her. Between the group meetings, the group troublemaker would call the other group members to ask things like, "How do you think the group is going? Do you feel the leader is doing a good job? Don't you think she talks a lot about herself?" While she appeared to be merely collecting feedback to encourage and support her group leader, she was really trying to undermine the leader. After this had gone on for a while, the group leader came to me.

My first question was whether the group leader had spoken to the group member about these calls to other members. She hadn't. In fact, the leader seemed a bit afraid of the woman. I do admit the offender was rather intimidating and imposing. I felt like I needed to stand up for my leader. I felt like I needed to defend her. I put on my super hero cape and intervened. This was my first mistake.

I called a meeting with the group leader, the troublemaker, and a wise, mature small-group coach. The coach was completely impartial and had no knowledge of the situation. Because I was already well triangulated into the thing, I at least had the presence of mind to invite someone more knowledgeable than me to hear them out.

The four of us sat down together. I gave both the group leader and the troublemaker 10 minutes to plead their cases. After each had a turn, we adjourned so I could hear from the small-group coach outside of the room. I asked, "What do you think?"

The coach pointed in the direction of the troublemaker and said, "This one wants to win." I knew we were at an impasse. No one was going to bend. The troublemaker, having been confronted with her offense, wasn't going to repent, apologize, or surrender. There was only one solution. I asked the troublemaker to leave the group. This was my second mistake.

While the group leader appreciated my support of her leadership, it didn't take long for the now excommunicated troublemaker to call every member of the group and stir things up even further. The group eventually dissolved. The leader was deflated. The rest of the group members were stressed by the situation. The troublemaker left the church. Mean ol' Pastor Allen was the problem. And they were partially right.

What I attempted to do in this situation was my own version of Jesus' teaching from Matthew 18:15-20:

If your brother or sister sins, go and point out their fault, just between the two of you. If they listen to you, you have won them over. But if they will not listen, take one or two others along, so that "every matter may be established by the testimony of two or three witnesses." If they still refuse to listen, tell it to the church; and if they refuse to listen even to the church, treat them as you would a pagan or a tax collector.

Again, truly I tell you that if two of you on earth agree about anything they ask for, it will be done for them by my Father in heaven. For where two or three gather in my name, there am I with them.

Often believers do a version of this in the church today, but it goes more like this:

If your brother or sister sins, go to one or two others and talk about the offender. Build your case. Assassinate their character. Hold resentment against them. Snub them at every turn. Make them so uncomfortable that they will eventually leave.

It's pretty obvious this is a case of twisted Scripture. Jesus wasn't advocating any kind of triangulation or co-dependency in his teaching. This is a straight forward approach.

Someone sinning against us is not just a difference of opinion. When we're talking sin, it means the Ten Commandments or one of the sin lists from the New Testament. Sin is lying, gossip, slander, stealing, murder, and so on. If I sin against you, then before you consult with everybody we know, you and I need to sit down—face to face, eye to eye—and you need to point out my fault in a way that recognizes your own fallenness as well as mine.

We might not be able to resolve all of this in one conversation, so let's keep talking. As long as we're willing to talk to each other, we don't need to involve anyone else. But if at some point, I refuse to admit my fault or seek forgiveness, it's time to find a third party to bring into the conversation.

If the assistance of a third party helps things, we're good. If not, we need to involve more people. "Church" here could mean different things. Let's say the incident occurred within our small group. We don't need to call a membership meeting of the whole church to address it. But we do need to discuss this in our group. Again, this is the last resort.

If I continue to refuse you after all of these folks who care about me have intervened, Jesus' instructions were to treat the person like a pagan or a tax collector. But what does that mean? In Jesus' day, a pagan simply was an unbeliever, and tax collectors were Jews who turned against their own people by collecting taxes for the Romans and skimming some off the top for themselves. Both pagans and tax collectors are essentially unbelievers. How are we supposed to treat unbelievers?

The church's mission in the world is to love unbelievers and challenge them with their need to repent. After putting an unrepentant believer out of the circle, his fellow brothers and sisters should continue to love him and challenge him to repent. But they don't include them in their circle of fellowship. The admission for that is a repentant heart.

If I had to do it over again with that small group, I would have first of all encouraged, empowered, and insisted that the group leader contact the troublemaker directly. If they couldn't gain any ground, then I would have stepped in with the coach. Once an impasse was determined, it shouldn't have been my decision to dismiss the troublemaker. We should have brought it to the "whole church," which in this case was the small group. If the troublemaker wouldn't listen to the group, then the group as a whole would ask her to leave. That would have left no doubt in her mind that she was in error. If at a future point, she was repentant, then the group should welcome her back with open arms.

When it comes to conflict, scriptural principles will certainly guide the way. The rest is learned in the school of hard knocks. As you address conflict in your ministry, you'll learn from your mistakes and grow better at it with every new opportunity.

What exactly is the difference between a house church and a small group?
Joel Comiskey
Training Tool

Help your group members discover and use their spiritual gifts.
J. I. Packer, Sam O'Neal, Terry Powell, and more
Article

Call Out the Spiritual Gifts in Your Group Members

Learn what you can do to steer new believers in your group toward growth.
Gordon MacDonald, John Ortberg, Carter Moss, and more
Article