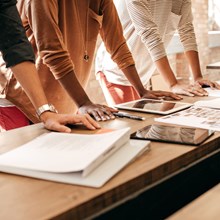 The importance of sharing as a leadership trait.
Michael C. Mack
expand

Sharing is a fundamental concept. Most of us learned how to do it in kindergarten. So why do so many people still struggle with it?

Sharing is also an elementary aspect of small-group life. The fact is, if you have surrendered your leadership to God, you will find it natural to share leadership with others. If you are shepherding group members toward spiritual growth, you will realize that as you guide them toward Christ-likeness, you are moving them onward to servant-leadership. If you are truly serving the group, you will let them do some of the leading. Learning to share happens in stages: promoting partnership and building teamwork.

On a group mountain bike ride, we were rolling alongside a creek when my front tire hit a deep rut, throwing me off. My bike fell about eight feet toward the creek. I went down after it, of course, but then I could get neither myself nor my bike up the creek’s steep, muddy embankment. Fortunately, my friend David was right there to pull me up. It reminded me of a favorite Bible verse: “Two are better than one, because they have a good return for their labor: If either of them falls down, one can help the other up. But pity anyone who falls and has no one to help them up” (Ecc. 4:9–10).

I’ve learned a lot about Christian life on my bicycle. I used to ride alone most of the time, but I’ve learned that group rides are best! I like having others there to pick me up. I enjoy encouraging one another and pushing each other to go farther, faster, and more dangerously! I love the return for our work when several of us on our road bikes take turns at the front of a pace line as the others draft and get a break. Drafting is a cycling technique that utilizes the law of aerodynamics to create a wake behind the lead rider, but, even more so, it utilizes the laws of partnership.

Two are better than one on the road, on the trail, and all along the journey. I see the same principles at work in healthy small groups:

I was selected as the biggest Michael Jordan fan in Anderson, Indiana, in 1993, the year of MJ’s first retirement. I was selected mostly because I had named my first son after him―well, kind of. My son’s name is Jordan Michael; he was born during the 1992 NBA Playoffs, and watched his first game with me that same night at the hospital. I like Michael Jordan for a reason: I like basketball and he is arguably the greatest basketball player of all time. Yet, his first NBA team, the Chicago Bulls, did not win the NBA championship until his seventh season. That’s when they assembled a great team around the world’s greatest player. To become a winning team, they had to learn everyone―not just the leader―brings something to the group, how to practice teamwork drills, and how to remove the obstacles to teamwork.

Everyone Brings Something to the Group

Small groups are much like sport teams. One player, or one leader, does not make a winning team. It takes participation by everyone―teamwork. That’s the essence of the apostle Paul’s description in 1 Corinthians 12 of the church as a body: “[T]he body is not made up of one part but of many” (v. 14). What goes for the church as a whole also goes for your small group. Although one person may lead as the group’s shepherd, each person has a gift to share with the rest of the group. Some may lead in hospitality, others may lead in administration, serving, encouraging, contributing to others’ needs, or showing mercy.

We can determine people’s gifts, abilities, and interests by wisely choosing one of these three ways. The first is to use a gifts assessment tool. These can be valuable, but they are usually not relational, and I believe they can pigeonhole people. I think better, more organic ways exist to discover gifts in a small group. Another way is simply to ask, “What do you enjoy doing? How can you help lead this group? What have you found is your gift? What do other people say you do well?”

My favorite way, however, to discover gifts is to watch as you live in community together. As the group gets to know one another, people’s gifts will start to become obvious―usually to everyone but the person with the gift! Take time at a meeting to affirm each other’s gifts. The group tells each person, in turn, what his or her gift is and why each person is an essential part of the team.

I have loved coaching kid’s sports teams, especially basketball. One of the most rewarding parts of coaching for me is taking a rag-tag group of kids who don’t know one another at the beginning of a season and turning them into a team―a team that works together as one, each using his or her unique abilities for the good of the whole. A team that wins―because five are better than one. It takes a lot of effort to build this teamwork―lots of drills and time spent together, both in and outside of practices and games. I love the way Coach John Wooden said it years ago, and I still share this quote with my teams: “It takes 10 hands to score a basket.”

Building a productive team as a small group is much the same. It takes intentional effort, both inside and outside group meeting times―team-building drills, such as these, can further strengthen your group into a team:

• Go on a camping or hiking trip together and give each person a specific assignment.

• Play a game such as volleyball, paintball, or a role-playing game against another group.

• Participate in a shared work experience or serving opportunity.

• Identify a common “enemy” or challenge together.

Remove the Obstacles to Teamwork

The biggest obstacle to building a team is a leader who will not, or cannot, share. In my years of ministry, I have discovered three main obstacles:

If you have trouble building a team, what is your obstacle?

If it is the heart, ask God to help you change your attitude. Ask for humility―humility precedes surrender. It is not too difficult for a humble leader to surrender control of the group. Begin by asking God to change your heart to be more like Jesus’.

If it is the habits, you can do several things to correct this. Start by learning the skills of building a highly functioning team. Next, change your habit. Then, let your group know things are going to be different, apologize for not giving each of them opportunities and responsibilities in the past, and ask them to remind you to let them be involved.

If it is the head, you probably need to recognize the issue and simply back off from doing everything. Swallow your pride; other group members may not lead the same way as you. Another attitude you may need to deal with is perfectionism. If that is you, work at becoming perfect at letting others get involved, even if they are not as good as you!

With God’s help, you can turn around the situations by removing the obstacles keeping you from building a team. One of the qualities of a great team is that everyone is working together toward a common goal. As a team, be sure to identify your goals―your God-sized plans―together, and then, as a team, just do it!

―Michael C. Mack is the editor of Christian Standard, a church leadership magazine started in 1866, a small-group consultant, and the author of numerous books. This article is excerpted from his book World’s Greatest Small Group: 7 Powerful Traits of a Life-Changing Leader. Used with permission.

Practical tips for developing your team—both as individuals and as one cohesive unit
Laura Holland, Bill Search, Jon Noto, and more
Training Tool 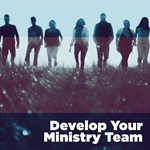 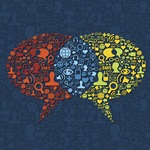