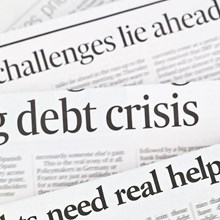 Often in the lull of late afternoon, coffee cup in hand, I will peruse the Internet to see what is happening in my community, city, country, and world. One day, in the shadow of the Paris bombings, I read about Colorado Springs and the refugee crisis. I read about discrimination, poverty, hunger, anger, and fear across the globe, and I felt the weight of the news.

The night before, my college-aged daughter had sent me a poem by a young Somali-British writer named Warsan Shire who wrote:

later that night
i held an atlas in my lap
ran my fingers across the whole world
and whispered
where does it hurt?

As the overwhelming depth and breadth of that pain sunk in, my computer pinged with a news alert about San Bernardino. It was too much. I actually began to shake with tears of rage and sorrow.

We live in a broken, fallen world.

As a follower of Jesus, I believe in the power of the Cross and Resurrection, and I believe that Jesus can redeem and restore all things. But the world I live in right now, today, is full of anxiety, bitterness, grief, and conflict. People are suffering. The hurt is everywhere. It's pervasive, overwhelming, and traumatic. The world seems out of control, dangerous, and dark, and we feel lost, small, and powerless. How, then, as a small-group leader, do I reflect the hope of a Savior who offers grace, love, and peace to the heavy hearts of those in my group?

In her book, Trauma & Grace: Theology in a Ruptured World, Serene Jones, President of Union Theological Seminary in New York, asks how we become a community that understands and bears witness to the depth of divine love and at the same time is profoundly aware of and affected by complex tragedy. Scheduled to give a lecture to a group of pastors six days after 9/11, Jones wrestled with what it means to live and speak the gospel in the midst of such violence, heartache, and rupture. She turned to the story in Luke 24 about the two men on the Road to Emmaus. It's the same story I looked to when the Sandy Hook tragedy occurred the day before our small-group leader Christmas party, and it's the same story I use today to guide me as a small-group leader wanting to care for group members who may feel helpless and hopeless because of the overwhelming weight of a hurting world.

In chapter 24, Luke introduces us to two disciples who are trying to make sense out of the devastating, traumatic death of their beloved leader. Even though they themselves were not tortured or killed, they bear some sense of trauma in their own bodies and souls. Their world that once held meaning and purpose has been shattered. Their futures that once held promise and hope now feel empty and dark.

On their walk to Emmaus, the two men try to make sense of what has happened in an attempt to pick up the pieces and reorder their lives. Luke gives us an account of what they're discussing. It's kind of a crazed recounting of the tragic events with a huge gaping hole in the middle of the story. I can only imagine the tangled thoughts and confused emotions behind their outpouring as they feel the weight of a world marred by violence and loss. Then Luke says Jesus suddenly is with them. The men do not recognize Jesus, but he listens to them, interrupts them, and then goes with them to share a meal.

Have you ever listened to people overwhelmed by suffering? Often they're disoriented because the things that provided meaning, structure, safety, and possibility in their lives have been shattered. The two men on Emmaus road are devastated witnesses to a horrifically traumatic killing of their leader and friend, the person they believed would be their king and savior. On many levels, they're struggling to find their way, and in the midst of that confusion, they don't recognize Jesus. Like these two men, we too can hold terror, sorrow, anger, and confusion in a dark and troubled world. We can get a little manic, ramble, feel lost, and not see Jesus. But this passage says Jesus himself came near and went with the men. In their overwhelmed, confused state, they didn't need to figure out how to reach Jesus—he goes to them. And he wants to hear what they're discussing.

When I directed a support and recovery ministry, any time there was a significant rupture, loss, or tragedy in our ministry or the world around us, I would gather us together in a small group and invite people to talk. As a small-group leader, I wanted to know how people were impacted by the trauma and tragedies that disfigured and disordered our world. Suffering requires that someone bear witness and testify in order for hope and healing to occur. Small groups can be that safe place where we can try and articulate the unspeakable and offer an anchor of presence that reflects the concern and care of Jesus.

On the road to Emmaus, Jesus does not problem-solve. Nor does he offer pious platitudes. He simply appears, full-bodied and present. He mostly listens. But when he does speak, he actually interrupts their fractured account with a reminder of his story. As small-group leaders, we want to invite people to share their heartache. We also want the discernment to know when the sharing has crossed from naming our struggles to chaotically imposing meaning, blame, and consequence in a way that distorts and leads us to contempt and hopelessness.

The Mystery of the Communion Table

When my small-group leaders gathered to talk about the Sandy Hook shootings, I could tell that people were shaken. In our confusion, grief, anger, and fear, however, we began to slide into taking sides on gun laws, evaluating parents, critiquing schools, commenting on upper middle class neighborhoods, and filling in the unknowns of the story with our own suspicions and speculations. We came into the group with lonely disoriented sorrow, but were now bogged down in angry contemptuous despair. Jesus had the courage and compassion to step into the frantic and dissociated playback loops that kept the disciples stuck in hurt and harm. I did not. But I remembered Jesus remaining with the two men and breaking bread. So I invited our group to a time of Communion.

In Luke 24, the men recognize Jesus during the ritual of breaking and blessing bread. The act of Communion both reflects and reframes what has just happened to Jesus' actual body. I don't quite understand the mystery of the Communion table, but I have experienced its power. Grace breaks into the heavy darkness, and we encounter Jesus. Sometimes it's through the formal act of taking the cup and the bread. Sometimes it's through the more informal sharing of a meal. But, gathering our small groups around the table in an earthy, shared experience grounds us and breaks into the confusion and chaos, the terror and grief. There is something about being at the table together that nourishes and strengthens, opening our eyes to a Jesus who lives and loves in the present, so that we can move back into our lives with hope for the future.

In the Luke story, the two men, knowing they have seen the Messiah, the risen Lord, are eager to tell others and be a witness and storyteller of the good news of hope and new life. They move back into their world where Luke tells us they will be terrified and confused again, but Jesus will come again, offering peace. He will share wounds, not hide or deny them, so that healing and faith are increased. He will reorient them again in the midst of their disbelief in the very human act of sharing a meal together.

Every day local and global events change how we see and experience the world, and we're often left confused, uncertain, and disoriented. Every day a tragedy strikes that brings the heaviness of injustice, sorrow, and despair. We cannot take away the weight of the world's hurt, but as small-group leaders, we can gather our group together if they feel scattered and lost in the midst of tragic events. We can invite them to share in ways that move them toward healing, and bring them to the Communion table where the miracle of the Cross offers hope. The world hurts everywhere. Small groups can be a place where we're reminded that Jesus is with us, and he deeply cares.

—Jen Oyama Murphy is a former small groups and support & recovery ministry director and is passionate about the substance of stories. 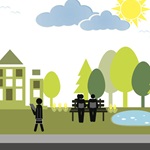