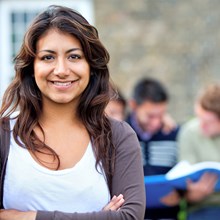 Obe Arellano leads a multiethnic church on the east side of Aurora, the second largest city in Illinois. Three years after planting the church with his wife, the East Aurora campus of Community Christian Church has 150 regular attenders—about 70 percent Latino, 25 percent white, and 5 percent African-American, a good representation of the surrounding community.

More than just being multiethnic, though, Arellano's church is truly bilingual. All but one staff member are bilingual, and Arellano actually preaches in both English and Spanish—in the same service. A first-generation Mexican-American, Arellano is passionate about ministering to the Hispanic community of East Aurora, and it shows: most of the people added to his campus are first-time Christ-followers.

I sat down with Arellano to learn about his church and how they do small groups in his unique setting.

What are some of the challenges you face with small groups?

On the other side, if they weren't brought up Christian, they were brought up Catholic. The challenge for them is that small groups are off their radar because they are taught not to gather outside of church to study the Bible. So if a Catholic comes to church and they find their way back to God, and then we say, "Hey, join a small group," they're like, "I can't do that." Not that they can't, but it's so ingrained in them that they cannot gather in a home to read the Bible.

It's easier to get non-Christians, people new to Christianity, to get involved with small groups than the other way around. I actually love the fact that at East Aurora campus, most of the growth that we've had has been from new Christ-followers.

In general, there is a lack of vision for small groups in the Hispanic community, and there's a lack of leadership development for them. In the Hispanic community, the pastor usually does everything, but the pastor can't run six small groups. And some pastors are afraid to give other people authority to lead. It's a whole church culture that needs to change. There's a wave of new churches and younger pastors who are willing to make that change.

Another thing is that Hispanics are less connected. It's ironic that culturally, Hispanic families are proud, saying we're so united, we're so family-oriented. Why doesn't that translate to small groups? I can't figure it out. First-generation Latinos are so family-oriented, so connected, but if you mention that we're going to talk about the Bible, even though it's an informal setting, they don't want to. It's weird. We do have a few, of course, that have grown to do that.

And that is one of the biggest challenges that most Hispanic churches are facing but they don't want to address. They're Spanish-speaking churches, and young people are leaving church. They don't speak Spanish or they don't want to speak Spanish. It's not their preference anymore, and so they don't come to church. Some stick around because of their parents, but if they're not connected or engaged they leave. If we do Spanish only, that would only reach the first generation. What's going to happen is that the kids growing up second or third generation eventually won't want to come because they won't understand. We can't blame them.

That's when we started thinking bilingual. That creates a very multiethnic environment where anybody can come, whether they speak Spanish or English. So the language is never an issue.

Our small groups take a break during the summer, but this fall we'll have three Spanish groups and four English groups.

The biggest "aha" moment for us in our first three years was that bilingual small groups are not effective. We tried it. We thought, We are a bilingual church. Let's do bilingual small groups. It did not work. One reason is because not everybody can translate themselves, and not every small-group leader can translate either. Two, if it's in a moment in small groups where somebody's sharing something, it's awkward to say: "Hold on a minute. Let me translate what you just said." And if it's emotional, if somebody's crying their heart out, how do you translate that?

So we took a step back from that model, and all groups are now either English or Spanish. We have two small groups that are Spanglish. They have young adults or young families that are fully bilingual. They go back and forth between English and Spanish, but they're comfortable with the back and forth. But we specifically say those groups are not bilingual because when we say "bilingual" people get the idea of what we do on Sundays where everything is going to be translated. It's two different things: bilingual and Spanglish.

How are you helping the next generation embrace small groups?

The structure of StuCo [the student ministry] is small groups, so when they come, they get in small group and they talk and that's just how it is. They don't see it as something they can't do. For them it's something they're learning as they go, and it's not an issue. And the language barrier is not an issue. It's all in English. Even if they're first generation, they're already learning English.

If you were to ask me, "What would you do if you weren't a pastor," this is it: coaching, training, and developing others to do this. I struggled when I moved to Aurora to plant a church because there are so few resources available. My heart beats fast when I think about being part of bringing Spanish resources to Hispanic leaders, and I'm working as the Latino Catalyst for Community and with NewThing Network to bring more resources in Spanish. We need practical resources for these pastors who are trying to bring about change. I'm not an expert, but I'm learning as I go, and I can share my experience.

Articles|Training Tools|Bible Studies
Top 10 Bible Studies for Small GroupsThe Editors
The Power of ForgivenessKeri Wyatt Kent
How to Pray for Your Small-Group MinistryAndrew Wheeler
Why Small Groups?Carolyn Taketa
What Was the New Testament Church Like?Joel Comiskey