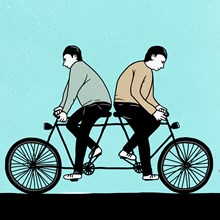 Conflict can be the fuel your team (or group) needs to maximize its impact.
Ryan Hartwig and Warren Bird
expand

The genius of teams are their collaborative potential. But to truly collaborate, a team must be willing to go about its most important work while eliciting and embracing conflict and debate over ideas while managing relational conflict.

Collaborative conversations require team members to not only advocate their own ideas, interests, and positions with passion and resolve, but also to pursue a process of inquiry to explore others’ interests and ideas. However, inquiry is certainly not easy. In these conversations, authenticity and vulnerability reign supreme as the group seeks to create innovative solutions to their problems. In such discussions, conflict naturally arises, and the team embraces and utilizes it to make better decisions.

“Conflict doesn’t destroy strong teams because strong teams focus on results,” argue Tom Rath and Barry Conchie, authors of Strengths Based Leadership. Instead, strong teams welcome healthy conflict, for it is the catalyst of extraordinary performance, and manage it in such a way that it does not destroy the team. Certainly this is a tricky balance, and another stay-on-the-road-between-two-ditches situation.

First, we’ll discuss how to cultivate the kind of conflict that fuels great team performances. To spur healthy conflict, we suggest that members of leadership teams:

In any case, don’t shut down this kind of conflict. Encourage it. It is the fuel your team needs to maximize its impact.

A caution is in order here. Not all conflict is good. Studies overwhelmingly suggest that task conflict is good, whereas affective, or relationship, conflict is bad. In other words, team members should challenge each other’s ideas, interrogate one another’s beliefs and values, and willingly offer different perspectives while refraining from attacking others, or making snide, sarcastic comments in the process. On many teams, sarcastic jokes can become a norm, and though they appear innocent, those sideways comments often have a greater impact than thought.

Thus engaging conflict over ideas without digressing into some sort of relationship conflict, especially when handling the kind of topics that senior leadership teams do, is quite the challenge. Just as we offered several tips for cultivating task-oriented conflict, we offer tips to manage relational conflict well when it arises.

Welcoming, cultivating, and effectively managing conflict is essential for a team to thrive in its decision-making work. When people have the opportunity to air their ideas and hesitations in an environment where their input is welcomed and truly considered, they are likely to unite around the decision that is made and walk out of the room unified in direction.

How does your group or team manage conflict? Sign up today to be part of the Cultivating Thriving Small Groups Study to get an objective view of what’s happening in your groups, and apply data-driven insights to figure out what to stop doing, keep doing, and start doing to help your ministry thrive.

How to Successfully Navigate Conflict in Small Groups

How to Be a Peacemaker

In a world that’s hungry for peace, we must choose to work through conflict in our personal relationships.
Rich Gorman
Article

If you want an excellent small-group ministry, you’ll need to learn to handle conflict well.
Will Johnston
Article

Create a culture of healthy conflict-resolution.
Kevin A. Miller