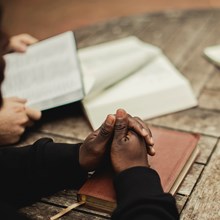 The struggle is real—and we have to own it if we want to change.
Joshua Hook
expand

I have discovered group members often struggle with taking ownership of their problems and issues, a necessary first step if we want to experience growth. Maybe you have a group member who always seems to blame his wife for their marital problems. From your interactions with him, you get the feeling he is partly responsible for their difficulties, but it’s tough for him to take any ownership of what is happening in their marriage.

Or maybe you have a group member who always seems to blame outside circumstances for the difficulties she is having in her life. Her boss is always giving her a hard time. She has health problems outside of her control. She had a rough upbringing. You sense that if she could take more ownership of her struggles, she might realize she has the power to make positive changes in her life. But she doesn’t seem to be able to do it.

Struggling to take ownership of our problems is a common human struggle rooted in the Fall. When Adam and Eve were confronted with their sin in the Garden of Eden, Adam blamed Eve (Gen. 3:12), and Eve blamed the serpent (Gen. 3:13). We have repeated this pattern throughout history. When faced with our issues and problems, it’s tough to take ownership and responsibility. Our natural reaction is to hide and blame others.

Struggling to take ownership of our problems is also supported by research. We have a natural tendency to self-enhance, which means we tend to have an overly positive view of ourselves (1). For example, the majority of individuals rate themselves as above-average on a wide array of positive personality traits and skills—a statistical impossibility (2).

Specifically related to the issue of owning one’s problems, hundreds of research studies have found that human beings tend to engage in something called the self-serving attribution bias (3). Attribution refers to explanations we make for why things occur. In general, people tend to attribute positive events to ourselves and negative events to other causes. For positive events, we tend to make attributions that are internal, stable, and global. In other words, we often link positive outcomes to some quality inside of us that is unlikely to change, and that will likely influence various aspects of our lives in an equally positive manner. For negative events, on the other hand, we tend to make attributions that are external, unstable, and specific—outside factors, likely to change, and only influencing one particular area of our lives.

The Problem with Not Taking Ownership

The problem with group members not taking ownership of their problems is that it leaves them with little power to make positive changes in their lives. People who have an internal locus of control—that is, they believe they have power to change their lives—tend to handle life’s challenges better than people who have an external locus of control, believing external forces are to blame for their problems (4). In group, I often say, “You can’t change what you can’t own.” If group members are not taking ownership of their issues, they will likely struggle to experience any meaningful healing and growth.

Here are nine strategies group leaders can use to assist group members in taking ownership of their own problems and struggles.

1. Set the foundation of grace and safety first.

Some group leaders make the mistake of offering group members the “truth” about their problem or situation without first developing a strong foundation of grace and safety. When this happens, the truth may be an accurate assessment, but it is unlikely to be received by group members. Instead, at the inception of your group, focus on developing a culture of grace, where group members experience the feeling they are accepted no matter what. Definitive boundaries—confidentiality, no judgments or criticism, the expectation of consistent attendance—will help group members feel safe. Once you have developed a strong foundation of grace and safety in your group, group members will begin to share vulnerably and are more likely to take ownership of their struggles.

It can be helpful to do a brief teaching and discussion about the importance of ownership. Make the connection explicit between taking ownership and having power to change a situation. It might seem counterintuitive to the group member, but explain that if the cause of the problem is internal—in other words, if it really is their fault—that’s actually a good thing, because they have the power to change their own life. If the cause of the problem is truly external and outside of their control, then they should honestly acknowledge they may be somewhat powerless to change those external factors, and come up with other solutions to navigate the situation.

7. Focus on your own business.

Laddering is a helpful strategy to help group members take ownership of their problems. It involves asking the simple question, “How is that a problem for you?” to redirect the group member to do their own work. For example, if a group member shared his spouse has been distant lately, the leader could ask, “How is that a problem for you?” This laddering question might help redirect him toward his own work. He might respond he doesn’t feel as if he is worthy of his wife’s time and attention, or that he feels powerless to ask his wife for what he needs—which is something he might work on in group.

9. Help group members own their judgments.

Helping group members own their judgments is another way to redirect them to take more ownership. When a group member has a lot of “energy” about an issue and makes a judgment, it often has something to do with themselves. It might be projection—possibly, they struggle with a similar battle. It may have to do with unresolved pain—maybe they have been hurt in a similar way in the past. Either way, by helping group members own their judgments, you can redirect them to do their own work. For example, if a group member judges her boss for being too critical, try redirecting her to think about how the judgment might have something to do with her—perhaps she struggles with being critical, or has some unresolved pain around being criticized.

Joshua N. Hook is an associate professor of psychology at the University of North Texas, and a licensed clinical psychologist in the state of Texas. He is the co-author of Helping Groups Heal: Leading Small Groups in the Process of Transformation, and he blogs regularly at www.JoshuaNHook.com. Joshua lives in Dallas, Texas with his wife Jenn, and attends Highland Park United Methodist Church. In his free time, he enjoys cheering on the Chicago Bears and trying not to get injured doing CrossFit. This article was made possible by a generous grant from the Templeton Foundation.

3 Mezulis, A. H., Abramson, L. Y., Hyde, J. S., & Hankin, B. L. (2004). Is there a universal positivity bias in attributions? A meta-analytic review of individual, developmental, and cultural differences in the self-serving attributional bias. Psychological Bulletin, 130, 711-747.