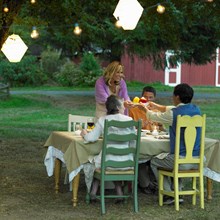 Learning the Patient Way of Jesus

How committing to community helps us grow in patience
C. Christopher Smith and John Pattison
expand

The local church is the crucible in which we are forged as the patient people of God. We have been united with each other in the life, death, resurrection, and ascension of Jesus. As we mature together into the fullness of Christ (Ephesians 4:13), over time and in our places, we learn patience by forgiving and being reconciled to one another. Our brothers and sisters may incessantly annoy us. But we are called in Christ to love and to be reconciled to them. Just as marriage vows serve as a covenant bond that holds a couple together in difficult times, our commitment to our faith community is essential if we are to learn patience and practice stability. Patience can hold us together when other forces conspire to rip us asunder.

The forces of fragmentation often emerge through the sufferings of others—including financial difficulties; addition to pornography, infidelity; the alienation of members based on economics, race, age, sexual orientation, and so on; and fears that lead to divisive behaviors like gossip and power grabbing. In those difficult times, it's natural for us to want to fix these struggles from a distance or to run from them altogether. But we learn patience by immersion, journeying faithfully alongside those who are suffering. It's easy, for example, to lob advice or judgment when a friend's marriage is falling apart. It's more complex, and more demanding, to sit down with the couple, to listen, to work slowly and conversationally toward healing, to celebrate reconciliation, or to grieve a divorce.

Some members of our churches will inevitably leave, be sent elsewhere, or die, but our commitment to grow deeper with the same people in the same place—come what may—will provide a rich context through which God will bring forth fruits of the Spirit (Galatians 5). The health and the fruitfulness of a plant diminish each time it is uprooted. In the same way, our growth toward patience is stunted each time we uproot ourselves from the sustaining soil of our local community. As we learn patience through the exercise of compassion in the local congregation, it flows outward from our church, making us more patient with neighbors, coworkers, other churches, community groups, civic officials, and people with whom we do business.

The Presence of Community in Tragedy

In the decade since I (Chris) have been a part of the Englewood Christian Church community, my sisters and brothers here have taught me much about compassion. There was one five-year period during which my wife and I were especially worn down. We were raising three very young children, one of whom was adopted as a toddler. We grieved the loss of a stillborn daughter. Our preschool-age son was diagnosed with cancer. And we were shocked by the unexpected death of my wife's father. Through all this, the church community was there, providing us with flexible work, helping financially at several points along the way, and taking care of all the funeral arrangements (and costs) for our daughter Hazel. But most important of all, they were just with us. They didn't feel the need to bombard us with religious platitudes. Grief, as Wolterstorff and others have observed, is isolating. Our family experienced that isolation, but we also had a deep, reassuring sense that our brothers and sisters were entering into that suffering with us.

In a recent lecture he gave on Slow Church, theologian Phil Kenneson told the story of something that happened at the United Methodist church he belongs to in eastern Tennessee. On Christmas Eve 1989, as the church was preparing to celebrate, they discovered that the 10-story building across the street was on fire. This building was the largest in the city, and it served as apartments for the low income and elderly. The church immediately canceled its holiday service. It became an operations hub for firefighters and rescue personnel, a triage center, and even a morgue, as 16 people lost their lives. Kenneson observes:

Needless to say, it was a sobering Christmas Eve. But one long-term effect on the congregation was to make it more attentive to its downtown neighbors. Sometimes the beauty of the world grabs your attention; at other times, tragedy does. Many members confessed to having previously paid scant attention to the folks who lived right across the street from our place of gathering … . And so the church began to examine ways it might be a better neighbor to these long-neglected folks across the street. So by the time [conversations] arose about moving to the suburbs [almost a decade later], the church was for the first time becoming involved with its neighbors. And this was the reason the congregation decided to stay, to abide, in downtown Johnson City. We believed we were there for a reason and that to leave would involve not merely abandoning an address and piece of property, but would mean abandoning these neighbors with whom we were trying to be in relationship. And so we stayed.

The Eucharist Teaches Us

The Eucharist is one important way we are reminded of our call to enter into the compassionate life of Jesus. This sacrament, consisting of real food and drink, highlights the connection between the ecology of God's reconciliation of all things and God's transformation of our desires so that we become a more patient and diligent people.

William Cavanaugh has observed in his superb little book Being Consumed: Economics and Christian Desire that although we take the bread and the cup of the Eucharist into our bodies, it is we who are being consumed by it. We are absorbed into the interconnected life of God's creation. Just as Christ becomes food for us, we give ourselves away and become food for others. We see that there is no room for us to be mere consumers—people who take without giving—and that "things" (including technology, programs, and all the accoutrements of our society) must be evaluated in light of how they bind us together with God and humanity.

We are not to cling to our things, but to use them for the sake of the common good … . We must understand where our things come from and how our things are produced. Things do not have personalities and lives of their own. But they are embedded in relationships of production and distribution that bring us into contact, for better or for worse, with other people's lives … . At the same time, a sacramental view sees things only as signs whose meaning is only completely fulfilled if they promote the good of communion with God and with other people.

Our desires are transformed as we submit ourselves to the eucharistic life of Christ. Additionally, as Cavanaugh says above, the most important factor we should consider in making the choices that give shape to our lives is not "Will it cause pain and suffering?" but rather "Will it move us in the direction of the common good?"

Seven Questions To Help You Grow Spiritually As A Leader

The Disconnect Between Assimilation and Spiritual Formation

Three Reasons You Need a Small Group, Too

Small-group ministry leaders can’t just talk about life in small groups—we need to be experiencing it ourselves.
Carolyn Taketa
Article

Everything you need to encourage healthy leadership in your ministry

Learning the Patient Way of Jesus