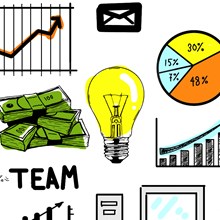 What it really looks like to unite our jobs and faith
J. D. Greear
expand

We need to equip people to live out Christian discipleship in the workplace. Small-group leaders are especially suited for this because they minister to laypeople every week in their groups. Most think about Christian discipleship as something that happens inside the church. Committing to Jesus means volunteering in the church nursery, attending a small group, being a greeter, going on a mission trip, serving at the soup kitchen, or giving money to the church. Work, on the other hand, is simply a necessity that must be endured to put bread on the table. God's primary interest in our jobs, it seems, is that we tithe our salaries.

Is it possible, though, to make our work "Christian"? Unfortunately, when we think about people who try to do this, all kinds of disturbing images come to mind:

Perhaps you remember the 2004 incident of an American Airlines pilot who, in his pre-flight announcements, asked all the Christians on board the plane to raise their hands. He then suggested that during the flight the other passengers talk to those people about their faith. Understandably, it freaked a lot of people out. The pilot of your airplane probably shouldn't be talking about whether you're ready to meet Jesus just before takeoff.

While we might think it's a nice idea to combine our work and faith, we have a hard time believing we could do it and keep our jobs. But the Bible actually has a lot to say about our work. For instance, the majority of the parables that Jesus told had a workplace context. And of the 40 miracles recorded in the book of Acts, 39 of them occurred outside of a church setting. God seems as concerned with displaying his power outside the walls of the church as he does within it.

As I've studied what the Bible says about this, I've found five qualities that make work "Christian." These five qualities are only possible if our work is done as a response to God through Christ.

Creation-Fulfilling
When God placed Adam in the Garden of Eden, he told him "to work it and take care of it" (Genesis 2:15). And that was before the curse. Work was not a punishment inflicted on Adam for his sin. It was part of God's original design. The Hebrew word abad, translated "work," means to prepare or develop. It shares the same root word as "worship." Adam was put in the Garden to be a co-creator. He was to take the raw materials of the earth and develop them for the glory of God and the benefit of humans. Just like contractors take the raw materials of sand and cement and use them to create buildings, and artists take color or music and arrange them into art, we are called to take God's good creation and make something even better with it. When we do this, God is himself at work through us.

Excellence-Pursuing
If our work is done for God, it should be done according to the highest standards of excellence. Paul writes, "Whatever you do, work at it with all your heart, as working for the Lord, not for human masters, since you know that you will receive an inheritance as your reward. It is the Lord Christ you are serving" (Colossians 3:23-24). In other words, we serve a higher boss than our employer; we work for a greater reward than our salary. In everything we do, we put on display the worthiness of our God.

This is one of the things that should set Christians apart. We do our work for the glory of God and how we do it points to an unseen kingdom better than recognition and salaries. The quality of our work should point to the glory of the God. Whether we teach or mop floors or write contracts, we do all to the glory of God.

Holiness-Reflecting
Work that is Christian will conform to the highest standards of ethics, because it seeks to demonstrate the justice and integrity of God. Business ethics really do matter because in them we are displaying the character of God in whose image we are made and according to whose pattern we create. Proverbs 11:1 says that unjust balances—cut corners, fudged balance sheets, skimped time cards, and so on—are an abomination to God.

Redemption-Displaying
If Christians were to act in their jobs with equity and fairness, that alone would set us apart. But the gospel takes us even further. Those who have experienced the gospel become like Christ. We begin to leverage our places of strength to bless and serve others, like Jesus leveraged his for us (2 Corinthians 8:9). A difficult question you must consider is: Where would I be if Jesus had approached his potential and his assets in the way I am approaching mine? We must follow in Jesus' example to leverage our lives for the kingdom of God. It isn't a special assignment for a sacred few. It's a call for all disciples of Jesus.

I recently heard a story about a young college graduate who landed a job on Madison Avenue in one of the advertising world's most prestigious firms. Shortly after she got there, she made a mistake that cost the company nearly $25,000. Madison Avenue is not a world defined by grace, and she expected to be fired by the end of the day. Her boss, however, went before his board of directors and convinced them to allow the blame for her mistake to fall on him instead. When this young woman heard what her boss had done, she came to him in tears. She asked him why, in that cutthroat atmosphere, he would choose to cut his own throat for her. He answered by sharing that because of the great grace that Jesus had shown him, he wanted to display a similar mercy to others when he could.

That's what redemption-displaying means for individuals within the workplace, for those who are living by kingdom principles. You think about blessing and lifting up the poor in your business. And that doesn't mean you have to be anti-capitalism or anti-profit. It simply means you think not just about personal profits in your business, but the blessing of everyone involved.

Mission-Advancing
Work done by disciples of Jesus should be done with a view toward the Great Commission—both in the workplace and around the world. Billy Graham says the next Great Awakening will likely take place in the workplace. Here's why: less and less people in our culture have the church as part of their lives. Steve Timmis, a pastor friend in London, said that 70 percent of British people say they have no intention of ever attending a church service. Not at Easter. Not for marriages. Not for funerals or Christmas Eve services. 70 percent. He writes,

We have to equip our people to share their faith in the marketplace because it's the only place we're going to encounter the unchurched! To empower people to share their faith, we must take away their excuses. We must help people see that they are equipped—by God himself—and that it doesn't have to add something extra to their schedules. Tim Chester says, "Evangelism is doing normal life with gospel intentionality." Instead of asking people to do something extra, we must help people look for opportunities to incorporate their faith into their current work. A great place to start is asking people to pray for the people they encounter regularly. It might be praying for the people in your company, the teachers and students at your school, the construction workers on your team, or the children and parents at the soccer game. Pray in general and pray specifically when the opportunity arises. My dad used to get to work early and walk the floor of his plant, memorizing each person's name, and asking people how he could pray for them.

Beyond empowering people to share their relationship with God in their workplaces, we have to give them a vision to use their business to carry the gospel around the world. I believe the next wave of missions will be on the wings of business. Most of the countries in the world in most need of a gospel presence are also those in the greatest need of business development. If you lay out a map of world poverty and overlay it with one showing the places in the world that are the most unreached, you'll see an incredible amount of overlap.

The nation of Iran is one example. Iran is an unreached area in desperate need of the gospel. There are 10 million seeking employment in Iran, a number that could eclipse 20 million within the next 15 years. Iran can be reached through the efforts of average Christian businesspeople taking their skills and expertise overseas, and there is huge biblical support for this.

In Acts, Luke seems to go out of his way to demonstrate that the gospel got around the world faster on the wings of businesspeople than it did even with the Apostles! Luke notes that the first time the church went everywhere, the Apostles were not included (Acts 8:1). Additionally, the longest sermon with the most powerful effect (the conversion of Saul) was preached by a layman, Stephen. Steven Neill, in History of Christian Missions, notes that of the three great church-planting centers in the ancient world (Antioch, Alexandria, and Rome), not one was founded by an Apostle.

Globalization, revolutions in technology, and urbanization have given the business community nearly universal access to the peoples of the world. Maybe God made you good at a specific skill so you could take it to places where he is not yet known. And maybe it won't be the most lucrative bottom line for you, but it will open up a whole nation to the gospel and give you an inheritance in an eternal kingdom. One man in our church was involved in a growing sports marketing firm. When he found out his firm had a branch in the Middle East, he asked to be transferred. He got to go as a missionary on the company's dime and spreads the gospel as he trains others to do meaningful jobs.

Not every Christian, of course, will be led to perform their business in an unreached area. But disciples of Jesus should always do their work with a missional vision. That requires two things:

Isn't that a missional vision we should all adopt? If we care about discipling our group members, we must equip them to make their faith part of their work. They must learn to see all things through the lens of following Jesus. Even—perhaps especially—their work.

—J. D. Greear is the lead pastor of The Summit Church in North Carolina and the co-author of Gospel: Recovering the Power that Made Christianity Revolutionary; copyright 2014 by Christianity Today and the author.

4 Ways to Keep Millennials in Your Small Groups

It's not enough to get them there on a Tuesday night.
Ashley Emmert
Training Tool

Equip leaders to help people understand the essential connection between their work and their faith.
The editors of Leadership Journal
Article