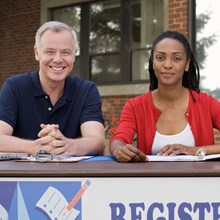 There are many types of small groups: Bible study, fellowship, support, affinity, life stage, and more. Regardless of focus, though, there are only two types of groups: short-term and long-term. Which type works best for your church?

To connect people into groups, you need a catalyst. I define a catalyst as an event or activity that gives people an avenue through which they can join a small group. I've used many different catalysts, and they can all be helpful.

From the first day you encourage people to join short-term small groups, set up a table in your church's lobby, the back of the sanctuary, or even outdoors under a patio umbrella. Make it clear where people can join a group after weekend worship services. Information about small groups and sign-up cards should be available.

Always have people hosting the table to help answer questions and collect sign-up information. We assign each of our small groups a weekend to serve as hosts at the table so the burden isn't too heavy for anyone. As hosts, it's not important that they have the answers to all the questions people have, but that they can find out and follow up. While having a sign up table every weekend is a lot of work, it's definitely beneficial to have a central place where people can learn about joining a small group.

For most small-groups pastors and directors I talk to, this is the holy grail of small-group publicity. Pulpit announcements are coveted because only the most important things that happen in the church are shared during the worship service. Plus, everyone who attends worship—the large majority of your congregation—will hear the announcement. If you do pulpit announcements, plan to have small groups announced for at least three consecutive weeks before the start of your short-term small groups. Because most people will attend worship three out of four weeks in a typical month, announcing the groups for three consecutive weeks gives you a greater chance of catching everyone.

Meaningful stories stir our emotions and compel us to action. When someone shares a story of life change that happened through a small group, others will want to experience small groups as well. Ask leaders which of their group members might be able to share a meaningful story. Then work with him or her to share during your worship service.

These are a great way to get out more information about your short-term small groups. You can also use the insert as a sign-up form that can be collected during or after service. This has been one of our favorite ways to connect people into small groups.

If your church is new to small groups, a connecting event can be a great way to help people understand more about small groups and the specific groups available. Plus, attenders get a taste for the other people interested in small groups, which may dispel the fear that no "normal" people are interested.

Connecting events work best when there's food. We've found that serving a meal is an incentive for people to attend. Along with the meal, we've done a variety of things. One time we did a quick Bible study on community. Another time we offered "speed dating" to find the right small group. People went around interviewing different leaders about their groups. It was a lot of fun.

While these are similar to connecting events, these fellowship events are usually smaller and in the neighborhood or area of town in which a small group meets. They might highlight a single short-term groups starting up or a few groups that are starting in the area. Food is still an important part, and we've had good turnouts with cookouts or potlucks. Group leaders introduce themselves, and talk briefly about their groups.

If your church has a website, make a small-group ministry page. Then you can do two simple things without a lot of effort. First, create a link to a list of your small groups that includes the contact information of the leader. Or, you can create a link to open an e-mail that goes to the church office or the small-group director. Choose who will follow up with people and connect them into the appropriate group.

Use a Variety of Efforts

We've found that our best way to connect people into small groups has simply been through bulletin insert sign ups that accompany an announcement from the pulpit. While we also have connecting events from time to time, we've realized that this simple combination at weekend services has a better return. But don't be afraid to try different strategies or to combine several together. You'll discover what works best for your church.

Too often we group people and then move on. But follow-up is important to make your short-term groups work. We've recently implemented an idea to make sure no one gets overlooked in the connecting process. We have borrowed an easy to remember schedule called the 4-14-40 pattern. Four days after new people sign up, we contact the leaders to make sure they have contacted the people wanting to join. Then 14 days after new people sign up, we contact them to see how their new small group is working out for them. And 40 days after sign up, we contact them one more time to make sure their new group is working well. We want to ensure that people are having a positive experience with their short-term groups, and this follow-up schedule helps us do that.

Following Christ with Our Actions

Authentic disciples vote with their feet and not mere words.
Albert Haase
Article