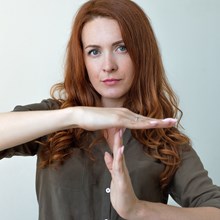 How to Quell a Dominating Personality in Your Group

Let's say your group is bonding well; everyone is engaging in conversation, and everyone seems to be enjoying the meetings. But then a new person joins the group, and suddenly they're dominating every conversation. No matter what topic is discussed or what question is asked, they eagerly share their opinions for 5, 10 or 20 minutes—and no one else can get a word in edgewise. Even worse, sometimes—when someone else starts to answer a question—the dominating person jumps in and talks louder until the first person gives up.

At first it's not a big deal and you think to yourself, "Well, maybe this person just needs to talk." But soon it becomes a real problem. After several meetings, some people in the group are clearly getting annoyed. Finally, one by one, people just stop coming to the group.

What has happened is the talker has sucked all the oxygen out of the group. They have crowded everyone else out.

Usually there are understandable reasons for the talker's behavior. But no matter why they do this, their actions are harmful to the group. So what do you do about it? Try the following, to start.

First, set the stage by announcing before each discussion that you want everyone to share. To help that, you want each person in the group to limit their sharing to no more than a minute. When the dominant personality starts talking, give them their minute and then wait until they catch a breath, or maybe just slow down just a little bit. Then catch their eye, hold up your hand, and say, "That's a really good point." Immediately look at another person in the group, direct your hand toward them, and ask, "What do you think?"

Keep "batting the ball around" in this way to get others involved in the conversation.

If the dominant person interrupts someone who had started to share, hold up a hand and say loudly, "Sorry, X, so-and-so was talking first." Then turn to the person who was interrupted, direct your hand toward them and say, "Now, what were you saying?"

After the meeting, chat privately with the dominating person and speak to them in a loving way: "I know you have good ideas and you really want to share them, but we need to get everyone involved in the discussion. Please help me get other people talking and sharing in the group by letting at least five people share before you do. That should encourage others to share."

If they are interrupting others, add, "You may not have known you were doing this, but you interrupted several people who were talking before you."

Usually, the talker will recognize these traits in themselves, and your conversation will help them think about when they're talking too much or interrupting others. It will also get them thinking about how to involve others.

Another technique is to use your body to direct the discussion. Try standing during the discussion time and facing each person who shares. If you're facing away from the dominating person, they can't get your attention. And if they start talking when you're facing away from them, don't turn to face them. When it is their turn to share, face them for a reasonable time and then turn to face someone else in the group, asking, "What do you think?"

If the dominating behavior continues after you've tried these ideas and talked to the dominating person privately, continue to divert the conversation from them during that meeting and have another private conversation with them, reminding them of your earlier conversation and again asking for their help and cooperation.

At an extreme, if things just don't get better, use a talking stick. It's a simple device in which the meeting facilitator—you or whoever is running the meeting—places a feather or a straw or a similar object on the floor in the middle of the group. Then you say, "In order for everyone to get a turn sharing, we're using a talking stick tonight. When you would like to share, please get my attention. When I give the talking stick to someone, it's their turn to share until I get the stick back. That means no interrupting or talking over the person."

This way you are in control of who has "permission" to speak. No stick, no talk.

If your group has small-group guidelines or a covenant, consider adding something like this: "Being respectful towards each other by not interrupting and by giving everyone equal opportunity to share."

If you don't have group guidelines or a covenant, this is a perfect reason to write one. Then, all you need to do when someone crosses the boundaries that the group has agreed to is to remind them privately of the agreement and ask for their help in keeping it.

—Ron Wilbur is Pastor of Small-Group Life at Saddleback Church.

8 Tips to Improve Communication Between Pastors and Small-Group Directors

It takes effort on both sides of the relationship.
Alan Danielson
Article

What Not to Say to Someone in Crisis

5 Myths About Introverts in Small Groups

Why introverts are actually assets to our groups
Amy Jackson
Article

Help! My Small Group Has Been Hijacked!

How to Quell a Dominating Personality in Your Group