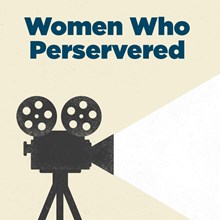 Enjoy watching these movies about very different women, all of whom overcome incredible odds to discover a new sense of themselves and a new sense of hope.

Erin Brockovich
Brockovich bullies her way into a clerking job at a law office, where she discovers medical records in a real estate case file. Her investigation tests her resolve, her motherhood, and her integrity.

Million Dollar Baby
This film tells the dark, despairing tale of a boxing coach's struggle with faith. When he pours his heart into the personal struggle of a young female boxer, tragedy strikes, and he is put to the test.

Woman, Thou Art Loosed
This film introduces a young woman whose anger at the sexual abuse and neglect she's suffered erupts in a horrible murder. As she shares her story with a pastor, it becomes clear that behind the hardened woman is a deeply wounded young girl.

Whale Rider
Born into tragedy, a young tribes-girl must suppress her inherent leadership traits to appease her tradition-rooted grandfather and her male-dominated community. But her struggle for identity will test her beliefs, her relationships, and her resolve.