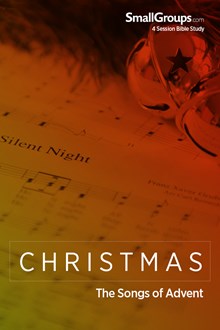 The Songs of Advent

As familiar as we are with the songs of Christmas, there are four songs recorded in the Bible to celebrate the birth of Jesus that most of us aren't familiar with. The angels sang a song to the shepherds. Mary sang a song to God after she had time to get over the shocking news that she was going to be the mother of the Savior. Simeon also had a song. Then there's Zechariah's song. Zechariah was an elderly priest who sang after being visited by an angel.

This wasn't like a Broadway musical—these people didn't suddenly burst into song. But the ancient church captured their words and created songs known as canticles.

Angels: A Song of Peace
This is a peace that passes our understanding.
Luke 2:13–14

Mary: A Song of Trust
Like Mary, we can move from anxiety to adoration.
Luke 1:46–55

This Study Through the Bible Course is based on the PreachingToday.com sermon series called "Songs for the Not-So-Holly-Jolly," by Ed Rowell.

The Songs of Advent