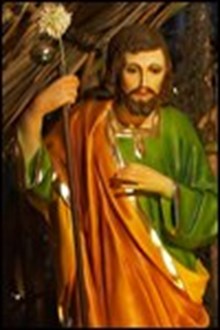 Gather your entire church around learning from the people of the Nativity.
expand

Have you ever considered the importance of the people of the nativity? This Church Discipleship Campaign will help your whole church gain wisdom from Joseph, Mary, the Shepherds, and the genealogy of Jesus.

This bundle includes four weeks of sermons for Advent, a Powerpoint presentation to use with the sermons, a four-week study for your church's small groups that follows the sermons, and a bulletin insert. Use these tools to get your entire church on the same page.

The Genealogy of Jesus
We tend to gloss over the genealogies in Scripture, but there's much about the human condition and about our Savior buried between the lines.
Matthew 1:1-17

Everybody knows the genealogies are the biggest yawn in the Bible. "Rehoboam begat Abijah, and Abijah begat Ralph." It warms your heart about as much as reading a phone book. What's not often said, but understood, is that it's probably best to skip over "the begats" and not get bogged down in all those funny old names.

Yet, at the same time, we pay lip service to 2 Timothy 3:16, which says, "All Scripture is God-breathed and is useful for teaching, rebuking, correcting and training in righteousness." If that's true, it includes the begats.

Joseph
Joseph was an ordinary man who sometimes believed his doubts and doubted his beliefs, yet he had enough faith to do what God wanted him to do.
Matthew 1:18-25

Most people know who Jesus was in the Christmas story. But most don't know him very well. He is often treated a bit like the father of the bride in a wedding—nobody notices him, but he has to pay for the whole affair. Christmas cost Joseph a great deal.

Mary
God entered human history through Mary because she was open and obedient to his will.
Luke 1:26-28

From one generation to another, Mary has been known as the mother of God. She was the one who gave birth to Jesus Christ, who was fully human and fully divine, God's own son. What was God doing, and why did he choose Mary to do it?

Shepherds were on the lowest rung of society. They commanded little respect and had no wealth or prestige. But in their tasks, they exemplified how the Savior of the world would treat his people.