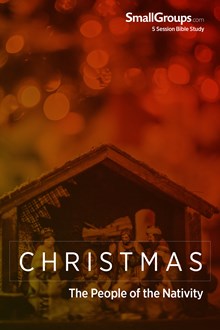 Explore the lives of the people in this familiar story.
expand

The people involved in the Nativity story are familiar to us, but what can we learn from them? This five-session course will look at those in the genealogy of Jesus, as well as the more familiar characters of Joseph, Mary, the shepherds, and the angels. Through these people we will learn about the human condition and God's character. We'll also learn how doubts can turn to faith, the importance of humility and obedience, and how to gain an eternal perspective.

The Genealogy of Jesus
We tend to gloss over the genealogies in Scripture, but there's much about the human condition and about our Savior buried between the lines.
Matthew 1:1–17

Genealogies are the biggest yawn in the Bible. Yet, we pay lip service to 2 Timothy 3:16, which says, "All Scripture is inspired by God and profitable for teaching and reproof." If that's true, it includes the begats.

Joseph
Joseph was an ordinary man who sometimes believed his doubts and doubted his beliefs, yet he had enough faith to do what God wanted him to do.
Matthew 1:18–25

Most people know who Joseph was in the Christmas story. But most don't know him very well. What you might not know is that Christmas cost Joseph a great deal.

Mary
God entered human history through Mary because she was open and obedient to his will.
Luke 1:26–38

From one generation to another, Mary has been known as the mother of God. What was God doing, and why did he choose Mary to do it?

Shepherds were on the lowest rung of society. But they exemplified how the Savior of the world would treat his people.

The Angels
Looking at the Nativity from the angels' perspective.
1 Timothy 3:16

Rarely do we give much thought as to what the Nativity meant to the angels. The phrase "was seen by angels" in 1 Timothy 3:16 invites us to view the whole of the Christmas story from the perspective of the angels.