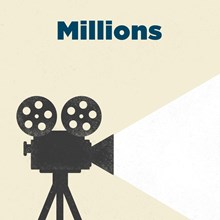 More money than you ever believed possible.
Mark Littleton
expand

Millions is a triumph of originality, creativity, and moral force. Seven-year-old Damian receives what he believes is a gift from heaven, cast into his refrigerator-box fort out by the train tracks. When he opens it, he discovers a huge sum in British currency. Through various visions of great saints of the faith, Damian believes God gave him the money to give to the poor. When he enlists his older brother Anthony to find ways to dispose of it, Anthony wants to use it to gain influence and luxuries. More conflict arises when the boys and their father discover the money was from a local robbery. How this works out in the family isn't always pretty, but it points out the power that wealth can have over us.