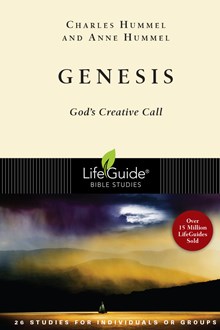 The One who called the world into being also calls you to serve him.
Charles Hummel
expand

Focusing on the first half of Genesis, these fourteen Bible studies by Charles and Anne Hummel ask you to consider what it means that the One who called the world into being also calls you to serve him.

Getting the Most Out of Genesis 1-25
This section introduces the topic, explains the structure followed in each study and offers tips for those approaching the study on their own as well as those participating in a group.

The Creation
The creation account reveals that God brings order, beauty and harmony out of an originally chaotic situation. In what areas do you need to trust God to produce these qualities in your life?
Genesis 1:1–2:3

Adam & Eve
Note the responsibility and instructions given to Adam in verses 15-17. What do they reveal about the life God originally intended for us?
Genesis 2:4-25

The First Sin
What mistakes do Adam and Eve make? Have any of these kinds of mistakes led you to disobey God?
Genesis 3

Cain & Abel
Cain is told that sin is crouching at the door and he must master it. What happens when we refuse to admit that we are on the wrong track?
Genesis 4–5

The Flood
How do current newspaper and TV headlines illustrate some ways our civilization resembles Noah's?
Genesis 6–7

The Rainbow
How is the sign of the rainbow especially appropriate to God's promise? How have you seen his grace at work in your life?
Genesis 8:1–9:17

The Tower of Babel
Why do you think all human efforts to achieve world unity fall short of what God desires?
Genesis 9:18–11:32

Abram's Call
How does the Lord save Abram from his own deception? Describe a time when you took matters into your own hands instead of trusting God's faithfulness. What were the results for you and others involved?
Genesis 12–13

Conflict & Covenant
The first time we read that Abram believed the Lord is Genesis 15:6. Explain in your own words what it means that the Lord "credited it to him as righteousness."
Job 35; 36:13-16

Ishmael & Isaac
It has been ten years since Abram and Sarai entered Canaan. What action does Sarai now suggest? How can our impatience with God's timetable lead us into unbelief and even disobedience?
Genesis 16–17

Sodom & Gomorrah
In this dialogue, what can you learn about Abraham's attitude toward the wicked cities and toward the Lord? In what ways can we intercede with God for our city, our state and our country because of its sins?
Genesis 18–19

Political & Family Crises
Seeing the effects of Abraham's fear and lack of trust, what can we learn from this account to help us deal with the ongoing fears we have?
Genesis 20–21

The Sacrifice of Isaac
Based on Abraham's example what does it mean to "fear" God?
Genesis 22–23

A Wife for Isaac
Abraham's servant did not ask for a vision or miraculous event but for guidance through clear signs in natural circumstances. When has God guided you this way?
Genesis 24:1–25:11