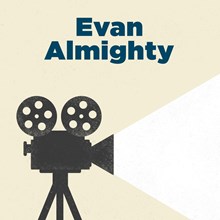 What does trust really look like?
Mark Moring
expand

When God told Noah to build an ark in the middle of nowhere, his friends and neighbors must've thought he was nuts. In Evan Almighty, a family-friendly comedy about a modern-day Noah, God tells a U.S. Congressman named Evan Baxter to build an ark. Evan initially resists, but once he's convinced he's really heard the voice of God-animals following him around, two by two, was a pretty good clue-he decides to trust, obey, and build that big boat … right in the middle of an affluent subdivision.

Everybody thinks Evan is nuts, including his family, who pretty much leaves him on his own. Yet Evan, like Noah, persists in obedience, no matter the consequences-even when it appears he'll lose everything. Use this guide to discuss this sequel to 2003's Bruce Almighty.