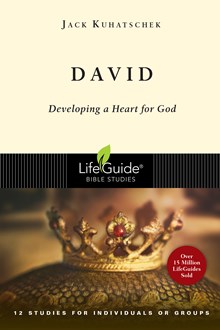 This 12-session study explores how to develop a heart for God.
Jack Kuhatschek
expand

In 12 studies, Jack Kuhatschek introduces you to David the servant and the leader, the sinner and the redeemed, the man and the instrument of God's creative purposes. As you explore David's tumultuous story, you too will discover what it means to have a passionate heart for God.

Getting the Most Out of David
This section introduces the topic, explains the structure followed in each study and offers tips for those approaching the study on their own as well as those participating in a group.

The Lord Looks at the Heart
The Lord tells Samuel, "Man looks at the outward appearance." What sorts of "outward" things do we tend to look at in people?
1 Samuel 16:1–13

The Battle Is the Lord's
David is confident that he can defeat Goliath. We normally take on responsibilities for which we feel qualified. Does faith remove the need for human qualifications?
1 Samuel 17

True Friendship
Think of your closest friend. If you could pick one area in which you'd like your friendship to be more like Jonathan and David's, what would it be?
1 Samuel 20:1–17, 30–42

A Matter of Conscience
What factors might have convinced David that it was God's will for him to kill Saul? We often rely on circumstances and the counsel of friends when making important decisions. To what extent are these reliable guides?
1 Samuel 24

Secure in the Lord
David is insulted by a man named Nabal. Even if David's offense is justified, how would you evaluate his plan to get even with Nabal? What methods do we sometimes use to "get even" with those who mistreat us?
1 Samuel 25

Finding Strength in the Lord
David declares that the Lord "has protected us and handed over to us the forces that came against us." If the Lord was able to do all that, why do you think he allowed the problem to arise in the first place?
1 Samuel 30:1–25

God's Wrath & Blessing
Uzzah's act of taking hold of the ark seems well-intentioned. Why then did the Lord's anger burn against him? Why are sincerity and good intentions sometimes not enough to please the Lord?
2 Samuel 6

God's Promise to David
What prompts David to want to build a house for the Lord? Throughout history, sincere people have built monuments for the Lord that he never asked for. How can we avoid involvement in these misguided projects?
2 Samuel 7

Facing Temptation
What steps led to David's sin with Bathsheba? Why do you think Satan often entices us with a series of temptations rather than offering us one "big" temptation?
2 Samuel 11

God's Severe Mercy
Why do you think Nathan tells David a story rather than confronting him directly about his sin? Why is it so difficult for us to be objective about our own sin?
2 Samuel 12

Misplaced Trust
What do you think motivated David to take a census of Israel? Why are we tempted to trust in human strength and resources rather than in the Lord?
1 Chronicles 21:1–22:1

Generous Giving
What effect does David's example have on the leaders of Israel and the people? In what ways have you been motivated to give more generously or to dedicate yourself more fully by observing the personal example of Christian leaders?
1 Chronicles 29

Jack Kuhatschek is executive vice president and publisher for Baker Publishing Group, Grand Rapids, Michigan. He is the author of many Bible study guides and the books including: Applying the Bible and The Superman Syndrome.