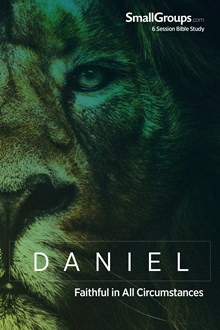 This study walks through Daniel's life and calls us to trust and obey God.
Bryan Chapell, with Michael C. Mack
expand

While we most often remember Daniel as the one in the lions' den, there was a lot more to his life. Throughout the first six chapters of Daniel, we learn about how to remain faithful in all circumstances. He ran into several trying situations that may have caused him to lose faith or bend from his beliefs, but Daniel stayed strong.

Daniel's Holiness
There are risks, reasons, and rewards for remaining undefiled by the world.
Daniel 1

Holy people are powerful tools in the hands of God. As they stand strong in the face of trails, they bear witness to the reality of their Lord and Savior. They inspire and challenge us to also stand strong for God's truth and righteousness. Daniel lived out this kind genuine holiness. At great risk of losing his life, he chose to remain undefiled by pagan Babylon.

What do you do when the bottom falls out of your career, your family's security, your health? What do you do when things just go horribly wrong? Though we don't like to think about it, we all know the unthinkable can happen. Believers are not insulated from life crises. We live in a fallen world and, like everyone else, may face crippling disappointment and disaster. In Daniel's response to the collapse of his own circumstances, we will learn what faithfulness to God looks like when the bottom does fall out.

Shadrach, Meshach, and Abednego did not operate on the popular notion that faith is about having confidence in expected or desired outcomes. By their words and actions, they proclaim a truly biblical faith: confidence in a sovereign God regardless of the outcomes.

The King's Life Lesson
Looking up to heaven
Daniel 4

Nebuchadnezzar needed a reminder about the limits of his greatness and glory. God gave him that reminder through a dream that terrified the king, and he again called for Daniel to interpret the vision. The meaning was as simple as it was scary. Daniel told King Nebuchadnezzar that he was going to have a great fall. And that he did! When Nebuchadnezzar ultimately regained his mind and rule, he plainly stated what "the peoples, nations, and men of every language who live in all the world" needed to learn as a result of his demise.

Daniel's Declaration of Righteous Judgment
The judgment of grace
Daniel 5

Chapter five of Daniel is the flipside of chapter four. In chapter four, Daniel used King Nebuchadnezzar's conversion to affirm that the repentant reap the rewards of grace, however bleak their pasts. In this chapter, Daniel uses King Belshazzar's sacrilege to declare that the rebellious reap the consequences of wrath, however secure their present. Two equally evil kings demonstrated two equally vital messages: God's complete pardon for the humble and God's sure judgment for the proud.

Sunday school pictures of a ruddy-faced lad in a lions' den have scant resemblance to the actual situation described in this sixth and last chapter of Daniel's life story. Daniel was more than 90 years old when these events unfolded. You might think he had earned a little rest and relaxation for those retirement years, but God still was using the faithful prophet. Age apparently is no barrier to spiritual usefulness. In Daniel's case, glorious gospel truths that have been building through the chapters describing his life in Babylon reach their climax.

This Study Through the Bible Course is based on a PreachingToday.com sermon series by Bryan Chapell.