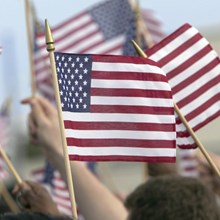 How can we labor for God’s kingdom during our time here on earth?
Elesha Coffman
expand

A few decades after the Roman Empire made Christianity its official religion–just as church leaders were gaining cultural power and social transformation seemed to be underway–an army of unbelievers reduced the "Eternal City" to ruins. Fifteen centuries later, as C. S. Lewis watched "Christian" Europe self-destruct, he pondered the same questions Augustine had asked in the last days of Rome: Why do so many promising human endeavors fail so miserably? Surrounded as we are by death and destruction, what can Christians possibly accomplish? How can we engage the world without being dragged down to its level? Is God's kingdom really coming? These are the questions we'll explore in this study.

–Teaching point one: All human institutions are deeply flawed.

–Teaching point two: Humans are sorely tempted to trust in their own collective strength.

–Teaching point four: Civil society can be a dangerous place, but Christians are needed there.

• Theology for an Age of Terror by Timothy George (September 2006, 12 printed pages)