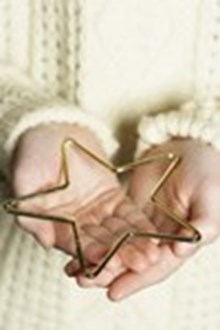 5 Big Messages of the Nativity

Study some of the leading messages regarding Christ's birth.
expand

God used amazing events to communicate that Jesus Christ was the promised Messiah who would be the Savior of the world. Give this one-page handout to anyone who has questions about the leading messages regarding Christ's birth, or for your own study.

The promise of the coming Savior appears like a thread running through the Old Testament, starting with a hint after the first recorded sin...

The most astounding message of the Nativity is that God became man. John tells us God became flesh and lived with us (John 1:14)...

The angel Gabriel appeared to Mary, not only to prepare her, a virgin, for bearing the Son of God, but to give her specific instructions concerning him...

Eight days after Jesus was born, Mary and Joseph took him to the temple. Simeon, who had been promised he wouldn't die before seeing the Lord's Christ, said, "My eyes have seen your salvation...

Christ Came for Our Salvation

Jesus came to fulfill thousands of years of prophecy. He would be the one who not only represented God, but was God (John 1:1). When Adam and Eve sinned...

5 Big Messages of the Nativity