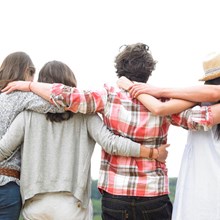 Why I'm Committed to Christian Community

"The thing I am most desperate to keep you from finding out about me is … I want to belong, but I don't know how."

I want to believe it wasn't always this way—that I wasn't always inept at the basic skill of belonging. But adults have a way of becoming calloused to truths we once knew well.

When I was 11, I noticed a patch of scratchy skin beginning to form on my upper arm. I tried to rub it off in the shower like flakes off a sunburn, but it persisted. It wasn't scaly by the time I went to the doctor for a biopsy. Like a snake, it had shed its scaly exterior and revealed a smooth, leathery patch that slithered beneath my freckles. Tests revealed it was the autoimmune disease scleroderma, a word from the Greek meaning "hard skin." Even if we treated it, it could kill me.

I relished the thought of having a life-threatening disease as if it validated the drama I experienced as an adolescent trying to make a home in my ever-changing skin. They were life threatening, too, those delicate social dances that taught us who and what to belong to. If we weren't careful, we would lose the suppleness of our youthful hearts, right along with our doughy cheeks and rounded bellies.

Middle-schoolers live close to the nerve of belonging. They can name its pain and pulses clearly. When popular research professor Brené Brown interviewed a bunch of eighth graders about their definition of the word, they offered this distinction: Fitting in means I have to be like you. Belonging means I get to be me. Did you catch that little word "get"? To "get" to be ourselves means that belonging is both a gift we receive and a pilgrimage we make. To be our authentic selves requires some getting to, some working out, some travelling toward as we discern the "me" we get to be. Learning to belong is lifetime work.

To be clear, we need help arriving as ourselves in this world. Belonging isn't just about being alone in a room with the door closed and the stereo on, with nothing but a Celine Dion song for company. Belonging is about discerning ourselves in the context of a community, a web of relationships both horizontal and vertical that gives us meaning and purpose and identity.

Brown describes her own definition of belonging as "the innate human desire to be part of something larger than us." For some people, this something larger could be participating in a home-brew club where you come out of your hopped-up broom closet once a month to swap science and stories. For others, this something larger goes beyond human community to belief in a spiritual community or a higher power as those in recovery groups like Alcoholics Anonymous are keen on calling it. For Christians, we often expect to find the source of our belonging in the church, a microcosm of the living, breathing body of God on earth.

So it's all the more tragic when the church becomes the source not of our belonging but our disappointment, a microcosm of petty, human organisms. Nowadays I hear less about how the church is a petri dish for growing connection, and more about how its culture is preventing people from developing healthy relationships with God, themselves, and others.

Picture of a Millennial

Marcus Mumford, the 20-something front man of Mumford and Sons, admitted in Rolling Stone that despite having personal views about the person of Jesus, "I've kind of separated myself from the culture of Christianity." He's not alone. Many of us strain to see how this kind of human community can resemble the holy communion Jesus offered when he said, "Take, eat; this is my body." It's no wonder that so many of us make up the growing population of religious "nones."

The nones, those folks who don't identify with any religious tradition but the majority of who still believe in God. The nones, who think organized religion is obsessed with money, sex, and rules. The nones, who at last count make up almost a third of my under-30 peers.

I am a 29-year-old who wears skinny jeans, man boots, and Mac's Red Russian lipstick. I live in North Carolina but was born in Nashville, reared in Ohio, raised near Chicago, schooled in Ann Arbor, married outside Charlotte, and awakened in San Francisco. I want to live in Seattle someday, but these days I'm making my home in Durham. I call myself a Christian, and a feminist too.

I like Jesus; I just don't like when he's separated from the other persons of the Trinity like the cheese who stands alone. I believe in tradition if there's a good reason behind it. It's just that I often can't get a straight answer about what that reason is.

I have a master's degree in theology, but I don't want to hear your dissertation. I want the specifics, like how you picture God when you pray and what you say to the beggar on the street who asks for money. I am interested in women and men who want to belong and are ready to do so with people who don't look and think and act like them.

The trouble is I have a hard time committing to these people, because as pastor Lillian Daniel puts it, "In church, in community, humanity is just way too close to look good."

Let me be upfront. The word commitment is about as attractive to me as the word submission or accountability. If a friend wants to schedule a coffee date more than two weeks out, I'm prone to write back, "Let's check in then and see how we're feeling." I don't buy two of anything—perfume, deodorant, canned soup—until I'm out of the first and can be sure I'm still in the mood for another. I even refuse to record addresses in my contact book with anything but pencil. (How am I supposed to know how long this relationship will last or whether you'll update me the next time you move or if I'll even want to include you on the Christmas card I keep meaning to send out?) Commitment means what was once a romantic possibility is now a real thing, with real flaws I couldn't have predicted, and worse, I can't avoid.

This is all to say that no one was more surprised than I was when, a year after writing those ten, simple words in my journal—I want to belong, but I don't know how—I found myself at a local church considering, of all things, commitment.

I arrived on a Sunday evening, the second bike trip to church of the day, with my helmet under my arm and my leather gloves tucked into my pockets. It was winter in North Carolina, and every ounce of color had gone underground. Even my wardrobe had morphed from an array of poppy flowers and navy stripes to a tired-looking fleece that appeared to be sprouting hair. I wiped snot onto my sleeve as I made my way past the staff offices and to the church parlor. The new members' class was called "The Inquirers," and I wondered if they'd be passing out capes along with our easy-peel nametags.

I took my seat at the edge of a fabric-covered couch near Martin, the senior pastor. On the other side of us was Jenny, a young Asian woman who'd been baptized at a nearby lake last summer and was moving along swiftly in her devotion. Across from us on the chair with the swirly, wooden back was Avery, a divinity school student from Palo Alto who I'd met a few times at young adult gatherings and took to admiring, although how one ventured to join a church less than six months after arriving stumped me. I chalked it up to the overachieving impulse of young women. To my right was a middle-aged couple who spoke to one another in the hushed tones of a library voice, a young couple who dropped their kids off in the nursery before arriving rumpled, and a boisterous man who was planning a wedding and like to talk about it.

But the chattiest Inquirers of all were Ralph and Marie, who had recently moved from Omaha to be near the grandkids. Marie took one look around the room when she walked in and jabbed Ralph, "Did we just stumble into the nursery?" I ventured she thought this was a compliment in a room where the median age was a disconcerting 30. The rest of the room unfolded in polite laughter.

We went around the circle to start, introducing ourselves by sharing our favorite dessert. I could skip the icebreakers, I thought, even though I got really animated talking about cupcakes and how I used to think the magic was in the frosting but these days I was finding more finesse in the cake. What I really wanted to know is why they were all here, not just how long they had been here, but why they were as crazy as I to consider joining a church—a church declining, some say dying. On life support even. Martin told us that within the Presbyterian denomination to which this church belongs, most congregations see more funerals than baptisms these days. Membership is at an all-time low, too—100,000 less than just a year ago.

So what I really want to ask you, and everyone else who had the gall to sit with me in that parlor, is Why commit to a church at all? Because it's what your parents did or your professors want? Or because you think it's the right example to set for your children now that they're old enough to repeat swear words in the back seat of the car? Are you really getting anything out of this, and are we even allowed to ask that?

Does it matter that I don't agree with everything you do or the pastor believes or the Bible says? And how much agreement do we really need to function as a church. And if you don't mind my asking one more question, what is our function as a church and what's the function of a class or a covenant or a pledge to make known a membership that seems to change so very little? What I want to ask most is whether commitment is as hard for you as it is for me. If so, thank God, and if not, thank God, too, because we need all kinds of kinds here.

The truth is we are not the superheroes we'd like to be. But maybe here we can be something better than superheroes. Maybe church is where we get to be the people we really are.

—Erin S. Lane is a millennial who works for the Seattle-based nonprofit Center for Courage & Renewal. This article is taken from Lessons in Belonging: From a Church-Going Commitment Phobe by Erin S. Lane. Copyright 2015 by Erin S. Lane. Used by permission of InterVarsity Press.

More on Millennials and Small Groups

Ministering to the life stage of 18- to 30-year-olds
Christian Smith, David Setran, Amy Jackson, and others 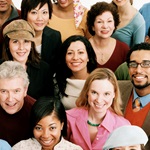 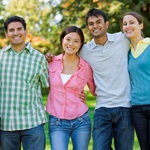 Why I'm Committed to Christian Community