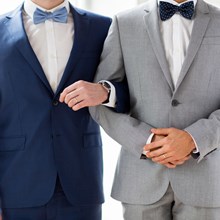 When a Same-Sex Married Couple Attends Your Small Group

Is it okay to welcome a gay couple to your group?
Chris Surratt, Kirby Holmes, and Justin Lee
expand

On June 26, 2015, the Supreme Court of the United States ruled same-sex marriage legal in all 50 states. Since then, church leaders have been trying to figure out how the ruling will affect their ministry. Small-group pastors are beginning to wonder whether small groups should welcome gay couples. Should same-sex married couples be barred from married small groups? Should they be welcomed with open arms? Three church leaders respond:

In response to the Supreme Court ruling on same-sex marriage, there's a lot of discussion about whether churches will be forced to conduct same-sex weddings. But I believe the issue will reach your small group first—if it hasn't already. What will you do when the first same-sex married couple shows up for your Tuesday night married couples group?

They are legally married in the eyes of the law, and your group was advertised as open to all married couples. Do we start adding asterisks beside the group descriptions: All are welcome *except if you're gay? If we go down this road, we better start dusting off the asterisks for divorced people, people with lust, husbands that cheat, etc.

This is not how Jesus invited people into his small group. He put out open invitations to tax collectors, liars, prostitutes, and thieves. To follow Jesus' example and open our groups to same-sex married couples, we must do five things to prepare:

1. Have the conversation now with your group.
It's never too early to start talking about this issue. Allow group members to express their feelings openly in a non-confrontational forum. Gay marriage will undoubtedly bring out deep feelings on both sides, but it's healthy for the group to talk through them and get everything on the table. If everyone in your group seems to fall on the same side of the issue, it may be a good idea to invite someone on the other side of the issue to come and talk to the group one night. It's amazing how harsh rhetoric softens when there's a familiar face to an issue.

2. Pray about what your response should be as a group.
Spend significant time in your group meeting seeking God on how you should respond to same-sex couples who want to join your group. Unfortunately, prayer in groups can become an afterthought. We can easily run out of time after the discussion and push it to the next meeting. Now is the time to seek wisdom and God's heart on how the group is going to be Jesus to the whole community.

3. Lead with grace and love.
Colossians 4:6 tells us to, "Let your conversation be always full of grace, seasoned with salt, so that you may know how to answer everyone." As you talk through your response, know that you should always lead the conversation with grace. Too often, we approach these conversations with mostly salt and very little grace. No matter how you feel about the issue of gay marriage, we are commanded to love.

4. Have a posture of acceptance.
While you may not believe the lifestyle is biblical, you have to remember that it's our job to love and the Holy Spirit's job to convict. Jesus made it clear in Matthew 22 that we are to do two things: love God with all of our heart, and love our neighbor as ourselves. We will not always agree with how our neighbors live their lives, but if we're going to love them, we must do so generously.

5. Be thankful for the opportunity.
God has sent every person to your small group for a reason. You have no idea how God is going to use side conversations and interactions to plant seeds for changed lives. Every single person in your group is a sinner in need of God's grace and love—and this is true of any new person coming to your group, too. You have the opportunity now to be full of grace, seasoned with salt, rather than simply dumping salt on their heads.

—Chris Surratt is author of Small Groups for the Rest of Us (available September 2015).

Point Them to the Hope of Jesus

Gateway Church in Austin, Texas, holds an orthodox view of gay sexuality. I think we've done a great job, though, of living out our theology with gay men and women in a way that has made a big difference in their church experience. A big part of that is the fact that we do not condemn or condone the gay lifestyle. These seem to be the two main ways the church has responded to gay people. We are exploring a third way with them—the way of hope. A small group has an incredible opportunity to explore the way of hope with a gay couple.

Though most Christians know someone who is gay, they're not in community with them and, therefore, can only imagine stereotypes of gay people. Small groups that are open to men and women who are gay will find that they don't want to change the institution of the church, or even be an activist for the gay agenda—they're just trying to find love, hope, and healing in their life.

This is why having small groups that are accessible for gay couples is so important. One thing we must do as the church is personally get to know gay men and women. When you hear their stories, your first response should be to grab a Kleenex, not your Bible. More often than not, you will hear stories of struggle, trauma, abuse, isolation, or fear driving much of their lives. Hearing these stories and responding with compassion will help you walk the way of hope together.

The way of hope is about being compassionate toward people, but it's also about pointing them to Jesus. Inviting a gay couple to start following Jesus is more important than talking to them about their same-sex relationship. Jesus is the one capable of doing transformation work in the inner-life of a person.

We have never expected anyone to change his or her outward behavior before being in community with us. If your church is expecting people's outward behavior to change before they get into your church community, you're not on the same mission as Jesus. Jesus invited anyone to his table to dine with him, just the way they were. It's through Jesus, and connecting into his life, that we're changed at a heart level. This internal life change is what motivates behavior change. Small groups that point their entire group, including gay men and women, to start following Jesus' leadership in their lives follow the way of hope.

There is a tremendous opportunity for the church to be open to gay men and women. Small-group leaders who can lead a community toward grace-giving acceptance, building relationships through vulnerable storytelling, and pointing people to Jesus will go a long way in the mission of Jesus to love all people—even our gay neighbors.

—Kirby Holmes is Lead Groups Pastor at the Northwest Campus of Gateway Church in Austin, Texas.

For the past 15 years, I've worked with Christians on both sides of the same-sex marriage debate—including many gay Christians. We strongly disagree with one another, but we agree on the centrality of Christ and the need to love one another.

From that perspective, here's my advice to small groups who don't approve of same-sex marriage but want to show love to a gay couple in the group.

1. First, get to know them as people. Given the current cultural climate, it can be tempting to see them primarily as an issue, but these are human beings who have made a choice to come to a small group where they know they may not be accepted. Ask them about their lives, interests, encounters with God, and so forth, just like you would for anyone else in the group. Don't let one relationship define them for you or for the group.

2. Welcome them openly. Often, Christians are concerned that if they show love and welcome to a gay couple without emphasizing their disapproval, the couple will wrongly assume that they approve of the relationship. In my experience, this isn't the case. Most gay couples I know assume that Christian groups disapprove unless someone explicitly says otherwise. Welcoming them with Christian love won't "send the wrong message"—in fact, it's what Jesus was often criticized for doing.

3. Look for things you can approve of. When Paul went to Athens, he found numerous idols—an offense to his Christian faith. Rather than responding with angry sermons about false gods, however, he used this as an opportunity to build relationships, complimenting the Athenians on their religious fervor and noting their desire to avoid offending any "unknown god"—a connection that ultimately gave him an opportunity to introduce them to Christ.

In a similar way, even if you believe that same-sex sexual activity is forbidden for Christians, there is still room to admire the love and dedication of this couple and the desire to grow closer to Christ that brought them to your group. Keep that front and center.

4. You don't need to talk about homosexuality. But if you do, focus on listening. I don't believe it is a small group's responsibility to call out every sin in someone's life or to debate about every theological disagreement within the group. Sometimes it's important to put those debates aside and create a safe space for people from all walks of life to study the Bible and grow closer to Christ.

If the topic comes up, though, it's important to listen to the stories of this couple and understand what they've been through, why they're Christians, and what brought them to your small group. Don't simply ask them to defend their reading of Scripture; ask about their lives, and truly, truly listen.

In addition to hearing this couple's stories, you might seek out those of other gay Christians, as in Wesley Hill's book Washed and Waiting, my book Torn: Rescuing the Gospel from the Gays-vs.-Christians Debate, and the documentary Through My Eyes.

5. Embrace the opportunity to learn. Often, when we encounter neighbors whose theological views we disagree with, our first instinct is to figure out how to correct them. Sometimes, that's what we're called to do. But other times, God wants to use them to teach us something about what it means to be a grace-filled Christian in today's world.

Embrace that opportunity and ask the Holy Spirit to open the hearts of your small-group members to see how God wants to use this couple in your lives. You might be surprised.

—Justin Lee is Executive Director of The Gay Christian Network and author of Torn.

What Does the Bible Say About Being Gay?

How to Help People Who Experience Same-Sex Attraction

God calls us to help with love, truth, and grace.
Bible Study

Our Unholy Blessing of Same-Sex Marriage

Sometimes loving a denomination requires you to leave.
Mark Moring

When a Same-Sex Married Couple Attends Your Small Group