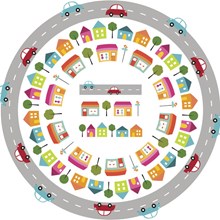 Meet People Where They Are

Note: This article is excerpted from our training tool Engage Your Community.

Jesus was the ultimate example for meeting people where they are—he often met people in non-traditional ways and places. He has shown us that anywhere can be a great place to meet him and his truths.

In order to engage with people in our communities, we'll need to get creative about when and how we meet them. And that begins with being familiar with the community we want to engage and its needs. Too often we simply assume what's needed.

For instance, we often assume it's best to offer small groups in the evening because people work all day. My assumptions were challenged, though, when a nurse approached me and asked if I would meet her and some of her coworkers at IHOP for breakfast when their shift was over at 7:00 a.m. They couldn't attend a small group at night because of their work schedule, yet these nurses wanted connection. I couldn't resist that, so I started a morning group at the local IHOP for them. It's not a traditional setting: there's no TV for videos, there are tons of other people around, and there's food on the table the whole time. Yet it meets a need for a specific group of people in my community.

Meeting at a public place like a restaurant has other perks as well. I currently lead a group of women who meet at 6:30 a.m. over breakfast to read the Bible and discuss our lives. God has used our time together not only to grow us but also to grow the people around us. Recently as we were leaving the restaurant, a waitress stopped us and asked if we would add her to our prayer list. She had just been diagnosed with cancer and was beginning her first round of chemotherapy. God used our time together to allow this woman a chance to ask for someone to fight with her. I am beyond grateful for the opportunity to walk alongside her.

According to the Bureau of Labor Statistics, sports and leisure activities are the number one thing people spend time on besides working and sleeping. Living in Louisiana, I know this all too well. Louisiana is considered "Sportsman's Paradise." When a few people wanted to start sports-related small groups, though, I was hesitant. But we've found that these groups meet people who may not otherwise be part of the church. At first we started a running group, a walking group, and a golfing group. The group meetings started with a devotional, and then enjoyed their sport of choice together. Each group had about 10 people, and in each group there were people who had cast the church aside due to bad experiences. The group members formed friendships that never would have happened outside of these unique groups. The focus on a shared interest made the groups non-threatening, and the relationships and honest conversations about life opened up group members to personal and spiritual growth.

To further this idea, we started hosting "sports mixers" where groups put on larger events around their sport. They invite group members, their families, and others they know who are interested in the sport. We provide snacks, the facility, and instruction, and we have a lot of fun. I personally invited people I knew were not believers to our tennis mixer. I didn't know if they would come, but three did. They got to see a loving and nonjudgmental group of Christians have fun and involve them in that fun.

We have two people that lead Bible studies at the local prison: one for men and one for women. Within these groups, people are growing and coming to know Christ. One woman recently released decided to follow through with what she had learned from the small group: stay strong in Christ and daily grow in him no matter where you are. She has been coming to our church, and she regularly attends her small group. Having someone come to her and provide a community experience while she was in prison opened the door for her. Now she feels safe and able to be herself as well as know God's love and mercy.

When we started talking to the homeless in our community, we realized that many don't have transportation to get to traditional group meetings. So we decided we needed to go to them and start a group.

One woman recently shared why it means so much to her. She believes the homeless are often viewed as "those people." But she noted, "Anyone is one paycheck away from being here." She lost her job, got sick, and simply didn't have enough money to stay in her apartment. The group at the homeless shelter brings her and others encouragement, hope, and healing—things we all need.

We also host a group at a safe house for abused women. It's a difficult group to lead because although they want to be a part of the group, they're hesitant. They've experienced betrayal, manipulation, and a slew of other hurts, and it's hard to trust others. Through consistent engagement, however, we built relationships with them and offered them a chance to connect with others in a safe group. They were able to express themselves, their hurts, and their hopes for the future. It's humbling and beautiful to see these women grow in trust—both with us and with our gentle and merciful Father.

In your community, there are unique places to hold small-group meetings, and they may be different than mine. Consider where people are already gathering and what they need. While these non-traditional meeting places may take some getting used to, it's worth it to engage with the people in our communities who desperately need connection.

Use these books on your own or with your group to gain vision and training.
Carter Moss
Training Tool

Discover the real needs of your community, and make a plan that fits your group.
Carter Moss, Peri Gilbert, Amy Jackson, and more
Article

Meet People Where They Are