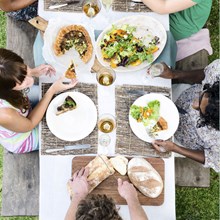 IF: Table is serving up relationships that challenge, support, and encourage.
Amy Jackson
expand

When Jennie Allen first felt God prompting her to empower a generation of women, she never envisioned a conference that tens of thousands of women would tune in to. When she and friends announced in late 2013 that they were planning the first IF: Gathering, women around the world caught the vision and forced the team's vision to become bigger than they ever anticipated.

But it wasn't just bigger—it was also faster. Within 42 minutes, the conference set for February 2014 was sold out, and the team decided to make it available for online streaming so that women around the country—and around the world—could tune in. That model stuck, and this year the IF: Gathering hosted 2,000 women in Austin and was simulcast to 110,000 locations worldwide, with some locations representing hundreds of women.

But the vision for IF was always more than a conference to Allen. She wants to gather, equip, and unleash a generation of women to live fully for God, and Allen realizes that living out our faith takes more than a once-a-year conference. It requires relationships that challenge, support, and encourage us. So Allen and her team dreamed up IF: Table—the simple idea to invite six women to dinner once a month to talk about God and life. To help facilitate these gatherings, the IF team creates four discussion starters each month for Table leaders to use.

"We try to keep them very simple so that anyone can relate, no matter where they're coming from," Allen explained. Each month features a theme that the team has prayed about. They've recently covered busyness, gratitude, weakness, and prayer.

If it sounds overly simple, know that Allen agrees. "We have not been a terribly intentional bunch. I say that not to be condescending to our team or to this vision, but to give great glory to God. Because honestly, we can't believe what he's done." Their best "guesstimate" for the number of people involved in IF: Table is 20,000.

Part of the beauty of IF: Table is that women can take this simple tool and run with it in ways that make sense for their community, coming alongside local churches, and that was always Allen's dream. As a result, the stories from IF: Table have been incredible.

Kim Wideman from Lubbock, Texas, wasn't sure about IF: Table at first. She admits that she "felt a prompting, but didn't obey out of fear." She had recently been wounded by some women, and she was nervous about opening up again. But IF: Table was different. For the first time, Wideman felt safe to open up because there was an understanding around the table: everyone was there for the same thing.

"It's not like it's rocket science," she laughed. "People have dinner all the time. But when it's intentional, it becomes a ministry opportunity." As the women in the group place value on the monthly gathering, the women themselves begin to feel valued, and that feeling of being valued is what led to Wideman's healing.

Wideman credits the monthly questions with helping the group share authentically. She appreciates that they "are designed to get past the fluff." Though "it takes time to get deep and messy," the questions have helped the women at her table dive in and get to know one another well in a short amount of time.

Now Wideman is preparing to use the IF: Table model for some small groups at her church. She hopes that this simple tool will help women in her church come together in healthy, healing ways.

Debbie Eaton from Trabuco Canyon, California, has taken a different approach to IF: Table. For the first few months, Eaton gathered six women of various ages. Each woman knew one other person, but no one knew everyone. She saw something amazing happen with the women who gathered: They relaxed and opened up, knowing this wasn't a high commitment group.

When one of the women shared about her struggles as a new mom, Eaton says it was "neat to watch the other women not fix her, but just talk to her in the most loving way, encouraging her to be the mother God created her to be." The new mom called her a few days later to express how much the conversation had helped her—more than any mothers' club or Bible study she'd been to—because it had been a safe place to share and she had felt heard.

After a few months, Eaton and two of the women began to dream about using the IF: Table format to develop women leaders. So in August 2014, they invited 30 diverse women from 12 different churches in Southern California. They separated into different tables and got to know one another. Rather than talk about their individual churches and focus on their differences, the women came to see each other as sisters in Christ. Eaton knew these women were leaders—whether they knew it or not—and she was excited to develop them through the IF: Table experience.

After answering the questions, the women gathered together to worship, pray for one another, and pray for new IF: Tables that might be birthed. They will gather again quarterly to share stories—not in a competitive way—but to encourage, motivate, and activate one another. "There's a movement happening out here in Southern California," Debbie shared. "I feel like I'm watching God move in ways that are breaking down walls. The table puts everyone on equal footing, and we begin to see each other as sisters in Christ."

Jennie Allen believes strongly in the importance of gathering together for Bible study in small groups, and IF: Table is helping facilitate that. She says,

All we've done is put these very simple tools out there, and then this passionate generation of Spirit-filled women take it and make a real impact in their community. You eat together, you open the Word, you pray, and you're generous to the needs around you. It's not new or cutting edge. But it's geared at people taking this into their world. It's not something to control or manage. It's something to offer that anybody can take it and use, and it'll be fun to see in Heaven how far it went.

IF: Table is a simple design for community that cuts through the surface level conversations that so many have grown content with. It's being replicated in ways that reflect unique communities, cutting across barriers of age, race, denomination, and region. As more women embrace authentic community through this simple model, leaders are rising up, and a generation of women are making a difference in their communities.

IF exists to gather, equip, and unleash the next generation of women to live out their purpose. Sign up for their free daily Bible reading plan, IF: Equip, to stay connected with them.