The Best Way to Do Evangelism Today

Seventy percent of churches in America are plateaued or declining, according to the widely respected church consultant Ed Stetzer. That is a sobering statistic that reveals a sobering reality: fewer and fewer people are being reached for Christ through established churches. What to do?

But how exactly do you plant a new church? Where do you start? It sounds like a daunting task even for the most evangelistically inclined.

A Church Plant for the City

Aaron and Amy Graham planted a church in Washington, D.C., in April 2010, by simply starting a small group. They invited friends and neighbors into their home and encouraged anyone who didn't have a church home to be part of their new church: The District Church. Within five months, their small group had multiplied to three groups, and they'd run out of room in their home, so they started renting space and held their first weekend worship service. From the beginning, though, they were clear about the importance of continuing to meet in small groups.

"What happens on Sunday mornings is just as important as what happens in our small groups during the week," Amy Graham said in our interview. "Our church was birthed out of a small group, and it's made up of small groups." With over 65 percent of their attenders in small groups, Graham isn't kidding.

We want to be a church that's here for the city, but we can only do that one neighborhood at a time. So we encourage our small groups to be geographically based so that people who live in close proximity are living life together and impacting and reaching out to their neighbors, drawing them into community.

Through their commitment to community, The District Church is reaching Washington, D.C.'s unique demographic. D.C. is filled with young, single, transient people, and The District Church's demographics reflect that with 62 percent age 23-30, and 24 percent age 31-40. That's 86 percent of their church age 40 or younger! Plus, 67 percent of their congregation is single, and they are multi-ethnic with 37 percent from minority ethnicities.

Eric Metcalf is a pastor in Chicago who helped plant a church just over a year ago: the Lincoln Park|Old Town Campus of Community Christian Church. Though they officially launched the church on October 20, 2013, Metcalf and his team started the church months earlier by starting a few small groups. A group of six met in someone's home, and a men's group was started at a local pub. Metcalf explained the importance of those two small groups:

Like The District Church, Lincoln Park|Old Town is a church of small groups. Their goal is to consistently have at least 75 percent of their church connected in groups. When they launched, they had nearly 100 percent of the adults in small groups. Today, 120 people gather every Sunday at Lincoln Park|Old Town to worship. Small groups are the backbone to growing their church "not just in numbers, but in depth." Metcalf went on to say, "We use our groups to develop leaders through apprenticeship. It also helps us develop a leadership pipeline for the next church or campus we launch."

With the goal of multiplying campuses into the many neighborhoods of Chicago, Metcalf and his team are already thinking about how they might reproduce their church in a new location. And small groups are the key to their plan—both in preparing potential leaders and in establishing a new location. More than just a place for fellowship, small groups at Lincoln Park|Old Town are essential to developing disciples, training apprentices, and multiplying the church's vision.

With so many success stories of church plants using small groups to launch, many brand-new church plants plan to use small groups. Spence Shelton of The Summit Church is preparing to launch a new church in Charlotte, North Carolina. Even now in the early stages of preparing to launch, Shelton and his team know that small groups will "play a big role from the get-go." He explains, "We are recruiting a launch team of around 50 people. For those 50, we will build at least 5 small groups and have a functioning small-group ministry before we launch services to the public."

Small groups aren't just a method for church planting to Shelton, but the way to launch a church that has healthy, long-term discipleship as a core value. Groups will set that value from the beginning and create a clear pathway for discipleship as their church plant launches and grows. They understand that methods can communicate and reinforce values.

A Model for Success

And this model isn't new. Bill Hybels took the same approach when he started Willow Creek Community Church in 1975. He writes,

One thing I really got right is that I started Willow with my friends. The founders are still with me today and we're still best of friends. I had an incredible team of proven people around me, and we had established a loving and joyful community before we held our first service. That I did right, by the grace of God. So if I were starting fresh, the minute I felt I had clarity on the vision for starting a new church, I would present that vision to close, trusted friends who I wanted to come along with me on this adventure.

According to Hybels, having a small group of close, trusted friends is essential to starting a new church because they won't "bail because something goes a little wrong. The glue, the adhesion, is already in place and will hold together."

A Mission to Reach People

Beyond starting with small groups, these church plants are very different. All three churches are in different cities with different missions. While The District Church has a mission of justice in a city full of young singles, Lincoln Park|Old Town focuses on serving people in some of the more affluent Chicago neighborhoods. And it's safe to say that the church plant in Charlotte will have a different focus, too, simply based on the demographics and culture of Charlotte.

One of the strengths of church plants is their ability to focus on a unique neighborhood and mission, reaching people who may not be reached by more established churches. Small groups help church plants in this by allowing them to build relationships with a small group of individuals, focusing on discipleship, apprenticeship, and mission that will allow them to impact their community as they launch—and for the long haul.

My own church is a 10-year-old church plant. We are deeply committed to the community, and our small groups are focused on discipling others who will then disciple others. A few years ago, my small group met Allan, a homeless man living in a day-to-day motel. Through our relationship with him, he started going to a small group and to church. He's also found permanent housing. His renewed commitment to Christ has deeply impacted him, and he intentionally seeks others to serve and help.

Allan is the type of person who is more or less invisible. He's isolated, has no means of transportation, and has no family. He never would have walked into a church on his own.

Over 70 years old, he stands out in our young, contemporary service, singing along to new worship songs—though he admits he prefers the choruses from the 1970s. But a church plant ministering through small groups, committed to the community, and focused on mission was exactly what Allan needed to draw him to Christ.

Stories like Allan's are exactly why Steven M. Pike says church planting is the best way to reach the lost in America. But any small group can have an impact on the community—whether or not it's part of a church plant. If small groups will take the stance of a church plant—choosing to truly see the people around them, reaching out to those far from God, discipling people who will disciple others, and developing leaders—they will impact their communities in huge ways.

Everything you need to start a new ministry 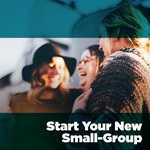 The Best Way to Do Evangelism Today