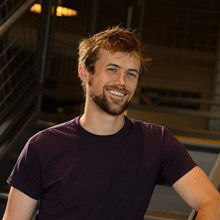 Meet Ben Reed, a Millennial on the Move

From leading groups in Tennessee to Saddleback
Amy Jackson
expand

If you don't know Ben Reed, you definitely should. Recently featured in Millennials Leading the Small-Group Movement, Ben is an advisor for SmallGroups.com, and he's been contributing articles since 2010. He deeply cares about people and group life, and he offers lots of wisdom in his articles.

Ben is no stranger to small groups. He joined his first group in high school when he and a few friends came back after a mission trip and were seeking a way to keep the spiritual momentum going. They "decided to get together on Friday nights to study the Bible and dig into each other's lives." Despite having no formal training, and not really even knowing what a small group was, they continued meeting and growing together. And Ben says that his life was changed forever: "in a way that 1,000 sermons never did."

Ben's been on the rise in the small-group world, and our former editor, Sam O'Neal, spotted him and asked him to begin contributing to SmallGroups.com. In 2010, he co-wrote his first article (with Alan Danielson) for our site, which is included in Planning a Short-Term Missions Trip as a Group. Ben writes practical articles that are favorites on our site. And it's precisely because he's been there. Ben says of writing for SmallGroups.com: "I love that I get to speak into the lives and ministries of men and women that are on the ground, just like I am. These are articles for practitioners who are stuck on the same things I’m stuck on, kept up by the same things that keep me up at night, and are passionate about what I’m passionate about." He loves getting to "help people in the trenches."

I caught up with Ben to get the scoop on his involvement in small groups over the years and his new role at Saddleback.

SmallGroups.com: How did you get involved in small-group ministry?

Ben Reed: It was random, really. I got a call from my friend Ron Edmondson while I was a student pastor at a church outside of Louisville, Kentucky. He said that they had a small-group pastor position open, and I said, “I didn’t know that was a thing.” My wife and I processed the potential move for a while and were confident God was in it, so we made the jump.

I had no idea that I’d step into an area of life and ministry that I’d grow so passionate about. It was absolutely God’s sovereignty that led us to group ministry, because I never would’ve chosen it on my own. Even though my life has been significantly altered by groups, I never saw that as a profession. I’m so glad God used my ignorance and the prompting of a friend, to get me to take the step into group ministry.

What keeps you involved in small-group ministry?

I’ve tried to do other things in ministry, but I continue to be drawn back to groups. It’s what fuels me in so many ways.

What will be your new role at Saddleback?

I'll be the Small Groups Pastor at the Lake Forest Campus. I’ll be leading the groups team, and focusing on small-group health. We want to make sure that each group is healthy and growing, and that each individual group experience is stellar and an excellent representation of Saddleback’s vision and values.

What excites you most about your new role?

I’m getting to come in to a heritage of small groups in a church that’s believed in small groups from its inception. I’m walking into an environment where I get to learn and grow and be part of a culture-shaping church that’s got a worldwide influence. I really value learning, which is something I’m going to do a lot of in the coming years. I can’t wait to join a healthy, incredibly strong team that has been doing groups at a high level for decades.

I’m really excited about a new challenge. It’s a different church in a different culture in a different city in a different state in a different part of the country. I grow and thrive when I have to learn a new culture and a new way of operating. And to do it on a healthy team with Steve Gladen is icing on the cake. Steve’s been a mentor of mine for years. He’s shaped me in more ways that he’ll ever know. Now I get to work with him on a daily basis.

A Word from Steve

Steve Gladen, who leads the small-group ministry at Saddleback, is also an advisor for SmallGroups.com. I chatted with him to hear more about bringing Ben Reed onto his team. Steve has known Ben since he was 25, and Steve has kept his eye on him. He sees potential in Ben and believes he can help take Saddleback small groups to the next level. Most of all, Steve says Ben is a real learner, and he'll be able to help the team at Saddleback seize opportunities. Steve spoke of real chemistry between the two of them, and he's excited to finally get to minister alongside Ben.

"He has a great team around him," Steve said. "It has all the makings of a beautiful thing."

As Ben enters this new role—and moves halfway across the country—he says this:

It’s really going to be a massive move for my family. Tennessee is where my wife and I both grew up, and it’s where we’ve lived the majority of our married lives. And, from what we hear, California is a little different than Tennessee. But we’re so, so excited to be following God as our journey continues.

We're excited to see what God will do in and through Ben in his new role, and we're looking forward to sharing more of his wisdom with you in the future.

—Amy Jackson is the managing editor of SmallGroups.com; copyright 2014 by Christianity Today.

Articles|Training Tools|Bible Studies
Top 10 Bible Studies for Small GroupsThe Editors
How to Pray for Your Small-Group MinistryAndrew Wheeler
How To Effectively Communicate with Group LeadersBen Reed
The Power of ForgivenessKeri Wyatt Kent
Why Small Groups?Carolyn Taketa

Meet Ben Reed, a Millennial on the Move